We’ve received a number of phone calls from members about the complete reversal of LHCC’s position on voting policies applicable to the upcoming vote on proposed governing documents. For the vote currently scheduled for 6/10/06, LHCC plans to:

Combining at large voting on the proposed declaration with allowing M & S to vote its over 700 non-dues paying lots, if allowed to take place, would determine the outcome of the election. For example, it would mean that the declaration for Section 6A with its 259 lots, a section where M & S owns no lots as of 4/30/06, could be amended even if every member in that section voted against the proposed declaration, because of the impact of M & S voting its over 700 lots. The impact on approval of the proposed Bylaws and Articles of Incorporation is even dramatic.

The directors and management of LHCC were adamant in public meetings in the spring of 2005 on 2 points: that any vote on the proposed declaration would be section by section, and that M & S would not be allowed to vote lots for which it is not paying dues, including voting its lots in an election on the new governing documents. This is a change of course if ever there was one.

END_OF_DOCUMENT_TOKEN_TO_BE_REPLACED

We’ve performed a careful review of the proposed governing documents, and there is one obvious conclusion: the documents as proposed are bad for just about every member, unless you are M & S or a future member of the Covenants Committee. There are 6 areas where the proposed documents hurt nearly every member:

Never forget that if your home or lot is a property at Lake Holiday, it is part of the Submitted Land and is covered by these governing documents.

END_OF_DOCUMENT_TOKEN_TO_BE_REPLACED

Paid our dues on time. Paid the amount printed on our LHCC coupon book. LHCC printed the coupon book. But the office insisted that we did not pay our dues. Calls unreturned. Letters unanswered. Wasted too much time trying to resolve this. The office spent $4.42 on certified postage outlining their position on the 3 cents. Click on the image below to get your money’s worth (most images work the same way). 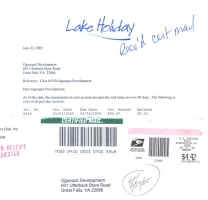 END_OF_DOCUMENT_TOKEN_TO_BE_REPLACED

Defective is as defective was. LHEUC’s 2 appeals of the SCC’s February 2006 order nullifying the changes to its rates and rules were rejected. On 3/14/06, the SCC made final its Order requiring LHEUC to refund the overcharges. The SCC did extend the deadline to pay refunds from May 1, 2006 to August 31, 2006. LHEUC also has to provide an accounting of refunds to the SCC by that date. Homeowners are entitled to a refund of $40.50 per month for each month they were overcharged. Anyone who overpaid the tap fee is entitled to a refund of $7,032 for each lot. Refunds have to be paid with interest.

END_OF_DOCUMENT_TOKEN_TO_BE_REPLACED

That’s one view of the 2 petitions LHEUC filed with the SCC asking the state agency to revise its late February ruling. On 2/28/06, LHEUC filed with the SCC a Petition for Reconsideration in an attempt to reverse the SCC’s 2/23/06 decision nullifying LHEUC’s recent rate increase and proposed changes to its rules. Then, apparently sensing that its first petition just wasn’t persuasive, LHCC filed a second petition. Then, on the next business day, LHEUC re-filed this petition as its slightly modified second petition. Under Virginia’s Administrative Code, the SCC’s order is under the control of the Commission and subject to modification for a period of 20 days, or until mid-March.

END_OF_DOCUMENT_TOKEN_TO_BE_REPLACED

Some words just sound bad, particularly if you’re a board president who insisted right up until the very end that everything was done the right way. Nullify is a bad sounding word. Defective doesn’t have a good ring to it, either.