We’ve received the letter you distributed in response to our mailing seeking support for a Special Meeting to remove certain directors.

You seem to be living in the past and out of touch with today’s events. You write that the “Association now has a record of prompt payments and receipts.” That was the past. The Association has nearly depleted approximately $2 million in cash and is seeking to borrow money. This is the present reality. You write that “the real estate values of [our] homes and properties have increased substantially in the past five years.” That was the past. Nearly every piece of real estate appreciated dramatically in the past 5 years. But now, the ubiquitous signs along Rt 522 of one of your company’s own builders offering 100% financing are a testimony to a simple fact of today: those homes aren’t selling as they did in the past, and the appreciation is reversing direction. This is the present reality.

END_OF_DOCUMENT_TOKEN_TO_BE_REPLACED

From the very beginning, LHCC members have not been told the whole truth about the Utility sale.

Chris Allison has led members to believe that we are trying to block the sale of the Utility. That’s simply not true. We do not believe it is good business to invest nearly $1.5 million in an asset and then shortly thereafter sell it for much less. Unfortunately, although we believe it is a bad deal, it also a done deal. There is a binding contract in place between the parties. It’s informative to look at some important provisions of this contract to see just why it’s such a bad deal as it is currently proposed.

In February of 2006, Chris Allison wrote that the utility sale “results in nearly 2 1/2 million to LHCC….” But he omitted that almost 50% of this amount is contingent on an aggressive building program and therefore may never be received at all.

END_OF_DOCUMENT_TOKEN_TO_BE_REPLACED

Many have wondered why Chris Allison and some Board members do such a good job of taking care of Miller & Smith. The answer: they’re partners. Have a listen to Chris Allison:

Get the Flash Player to see the wordTube Media Player.

END_OF_DOCUMENT_TOKEN_TO_BE_REPLACED

Approval of the Chris Allison-crafted governing documents – the declaration, the articles of incorporation, and the bylaws – failed. It took the board until Monday, June 19th – 9 days after the election – to announce the results. The graph below summarizes what many suspected: 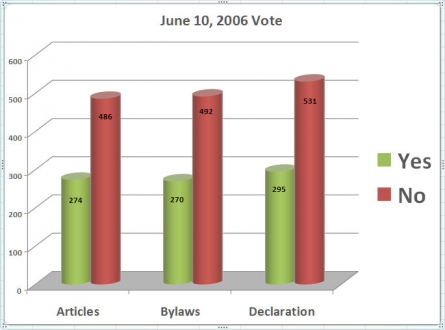 In the end, more than the approval of documents failed. Chris Allison and the board failed to make a genuine effort to promote democracy by adopting voting standards different from recent Lake Holiday elections. Chris Allison and the board failed to listen to widespread discontent in the community, evidenced by the numerous “Vote No” signs on Redland Road and at all of the mail stops. They failed to sell the community on their documents, despite their free Miller & Smith hot dogs and other aggressive sales efforts that continued right through the meeting of members on June 10th.

END_OF_DOCUMENT_TOKEN_TO_BE_REPLACED

As the title says… 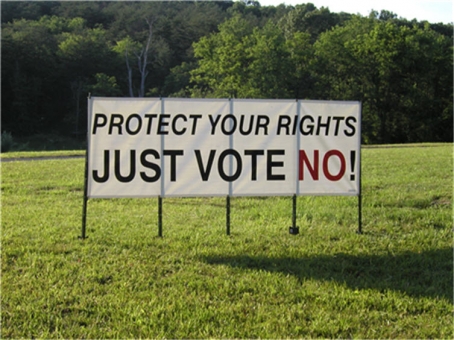 In February, Chris Allison wasted Association funds to send around a 3 page personal attack letter targeting the principals of Ogunquit – the “Mr. Murray” letter. In it Chris Allison falsely claimed that the first communication the Board had with Ogunquit was a letter from our attorney claiming that we suffered $4 million in damages, followed by a lawsuit for the same $4 million. He falsely alleged that the claim for damages was “payable to him.” He left a link to this personal attack letter on the Association’s website for many weeks. Chris Allison’s attack had a fundamental flaw: it was not true.

END_OF_DOCUMENT_TOKEN_TO_BE_REPLACED

Because you’ve been Individually Assessed!

For those who weren’t able to attend the 5/20/05 meeting at Reynolds Fire Hall, we offer up another little gem – the devilish concept of Individual Assessments.

Get the Flash Player to see the wordTube Media Player.

END_OF_DOCUMENT_TOKEN_TO_BE_REPLACED

We mentioned in our post on Chris Allison’s broken promise that there was an excellent article on The Summit Advisor that provided a powerful recap of issues at Lake Holiday. That article prompted us to do a little more research on the adoption of Goldberg’s Rules of Order by the Chris Allison-led board in October of 2005. Previously, the Associated conducted meetings under Robert’s Rules of Order. Just a minor change, right? Not by a long shot. Choose the rules and you control the outcome.

END_OF_DOCUMENT_TOKEN_TO_BE_REPLACED

For those who were unable to attend the presentation given by Chris Allison and Wayne Poyer at the Reynolds Fire Hall on Saturday 5/20/06, we wanted to provide a little taste of what you missed.

END_OF_DOCUMENT_TOKEN_TO_BE_REPLACED

1. Chris, why let Miller & Smith vote the Trust lots when the owner of these lots is not a member and is not paying dues?

FYI: This was not clearly disclosed to members, especially when one considers that Chris Allison and the Board expressed exactly the opposite position last spring. This seems to put the interest of a non-dues paying entity which is not even a member for those lots ahead of the interests of dues paying members whose interests the Board has a fiduciary responsibility to protect.

2. Chris, why is the 6/10/06 vote on the new declaration at large instead of section-by-section?

FYI: Section 6A has 259 lots, and none of them are owned by Miller & Smith. Chris Allison and the Board’s decision to vote on the declaration at large, instead of section-by-section, means that non-owners will be voting to amend another owner’s declaration. Combining at large voting with allowing Miller & Smith to vote over 700 non-dues paying lots means that voters in every section will be swamped! In Section 4B, there are only 16 lots. How will these lot owners have any chance of a fair election?