You are here: Home / History

LakeHolidayNews.com is focused on discussing issues relevant to the property owners at Lake Holiday, a community of approximately 2700 lots surrounding a 240 acre man-made lake located in Cross Junction, Virginia. This functional map of the area will help locate the community and its surroundings.

We do not intend this to be a complete history of Lake Holiday. Our purpose is to give a brief background on the community and to spell out some acronyms that are on almost every page of our blog.

Lake Holiday Country Club Inc. (LHCC or, simply, the Association) is a non-stock corporation that operates the homeowners’ association (HOA) at Lake Holiday. Up until the end of 2006, it owned all of the stock of Lake Holiday Estates Utility Company (LHEUC or, simply, the Utility). In February of 2006, LHCC, LHEUC, and Aqua Lake Holiday Utilities Inc. filed a joint petition with the Virginia State Corporation Commission (SCC) to transfer the Utility’s assets to Aqua Lake Holiday Utilities Inc., a subsidiary of Aqua America. We refer to Aqua Lake Holiday Utilities or its Virginia operations generally as Aqua Virginia. In November of 2006, the SCC granted the transfer, and the transaction closed at the end of that year. Like LHEUC before it, Aqua Virginia holds a certificate from the SCC to provide water and sewer service to the entire subdivision. There are approximately 700 homes and 2000 vacant lots in the subdivision. Of the 2000 vacant lots, about 380 have utilities available to them.

The land for Lake Holiday subdivision was assembled in the late 1960’s and early 1970’s, but construction of all of the roads and utility facilities was not completed because of the original developer’s financial difficulties. Basic roads and utilities remain unfinished to this day. Following the departure of the original developer, the Association continued to develop the subdivision as its resources permitted. In the late 1990’s, LHCC was rocked by a successful effort to oust its president and board of directors. For a period of time following this ouster, the affairs of the Association were managed by a court-appointed special commissioner. From May 1998 to August 2002, a court-imposed moratorium on new home construction was in place because of the poor operating performance of the Utility, and restrictions from these court decisions remain in effect today.

In order to obtain a building permit for construction of a home at Lake Holiday, water and sewer utilities must be available to the lot. This has given rise to the term Buildable Lot to describe those lots which are served by existing utility lines. A Membership Lot is a lot without utility availability. At times, this term leads to confusion because some incorrectly believe that these owners originally agreed to purchase lots with an ability to use the lake, rather than lots as future home sites. Nevertheless, the term Membership Lot has been used over a period of years to describe these lots, so we follow this tradition and use it here.

Homeowners, owners of Buildable Lots, and owners of Membership Lots have been billed assessments by the Association. As of January 2006, the annual assessment billed by the Association for homes is $1,225; for Buildable Lots it is $1,138; and for Membership Lots it is $583. In addition, homeowners and owners of Buildable Lots are billed utility and utility availability fees by the utility provider. As of December 2005, homeowners were billed $817.56 annually for water/sewer service, and Buildable Lot owners were billed $240 annually for utility availability fees. A Buildable Lot owner also would be billed a tap fee of $12,000 (previously $8,868) by the utility to connect to the Aqua Virginia’s lines at the time he applied for a construction permit.

According to LHCC’s Articles of Incorporation and Bylaws, each member is entitled to 1 vote in the affairs of the Association, with a notable exception. In 1984, the management of LHCC and LHEUC reached an agreement to settle litigation (predictably called the 1984 Settlement Agreement) with Independence Land, the financial company that took possession of hundreds of lots at Lake Holiday in July of 1977. Independence Land owned certain sections at Lake Holiday outright (Sections 5C, 9, 10, and 12); in Section 11, it owned all but 5 lots; and it owned 26 lots in Section 5B. As part of the litigation settlement, Independence Land secured a waiver of fees and dues for these approximately 686 lots until the lots are built on but gave up its membership and its right to vote these lots in the affairs of the Association. LHCC received title to approximately 260 lots from Independence Land, most of which it still owns.

In late 2002 and early 2003, Lake Holiday LLC, an entity1 formed by Miller & Smith of McLean, Virginia and Oakcrest Builders of Winchester, Virginia purchased these approximately 686 lots. LHCC took to calling this entity simply LLC, but that can be easily mistaken for LHCC by a quick reader. To avoid confusion with all of the things that have “Lake Holiday” in their names, we refer to this entity as Miller & Smith, and, when our fingers are really tired, simply M & S.

All of the land colored on the map below was purchased by M & S from Independence Land as part of the transaction described above. In addition to the approximately 686 lots, M & S purchased 11 other parcels. Most of these parcels are in the area surrounding – but not officially part of – the Lake Holiday subdivision. These parcels total over 300 acres. They are colored in red on the map below. M & S has been working aggressively to modify the governing documents of the Association to give it the opportunity to add this land to the Lake Holiday subdivision, thereby giving it access to the lake and other amenities enjoyed by Lake Holiday members. 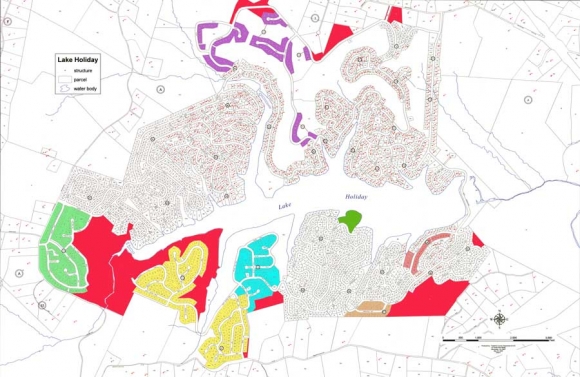 Despite the fact that almost 40% of the property owners2 of Lake Holiday are owners of Membership Lots, the disparity in influence is significant. For example, not one of the 11 members of LHCC’s board of directors that was seated after the conclusion of the October 2005 and 2006 elections was exclusively a Membership Lot owner; all were homeowners. This has been typical of the makeup of the Association’s board of directors. Membership Lot owners have never achieved the representation to match their makeup of all owners. They have been effectively excluded from governance of the Association. When the interest of Buildable Lot owners is considered, the representation gap is even larger. If every owner were considered a voter, over 60% of the voters are vacant lot owners but not one of the members of the board of directors is exclusively a vacant lot owner.

Membership Lot owners have paid dues for many years – in some cases for more than 30 years. These dues have been used to expand utilities and improve roads, but Membership Lot owners have not benefited from these expenditures to the same degree as homeowners. Utilities have not been extended to Membership Lots, and road maintenance work has been nearly exclusively focused on areas with existing homes. Buildable Lot owners have faced periods when their lots were not in fact buildable. Available utility capacity must be monitored on a regular basis to insure there is adequate capacity to serve them.

Dealing with this under-representation and unfair treatment of vacant lot owners generally, and Membership Lot owners specifically, are among the biggest issues facing Lake Holiday today.