You are here: Home / Finances / We’ve Got a Really Sweet Deal For You…

How do we know the lots were sold too cheaply? Take a look at the table below. 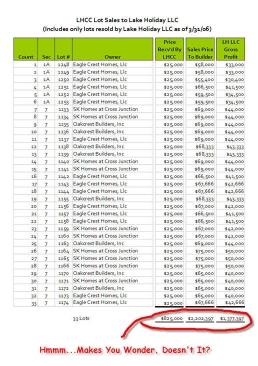 These directors of the Association agreed to the ridiculous price of $25,000 per lot – and agreed to that price forever into the future on all of the Association’s lots in Sections 1A and 7. M & S can wait 10 years or more and then come to the Association and buy some lots – for $25,000. Who in his right mind agrees to a fixed price forever into the future on something like real estate – something that everyone knows goes up in value over time? Notice how M & S has raised the price it gets over time, from $58,000 to $75,000, but the price LHCC gets hasn’t budged by 1 penny.

The document that spells out the terms for selling these lots is the Development Agreement, the agreement that these directors entered into with M & S in May of 2004. Should the directors have known better at that time? In the period from the end of the building moratorium to the end of April of 2004, there had already been 14 lot sales at Lake Holiday at prices between $42,500 and $55,000. This is the period before the Development Agreement was executed. The directors knew or should have known about these transactions, because they received information on each and every property transfer as it occured. This very topic was discussed at the January 23, 2003 Board Meeting, and it is recorded in the minutes:

The Board engaged in considerable discussion on the various options for establishing the value of lots owned by LHCC. Do we get a formal appraisal, or do we get a broker’s assessment? Do we appraise all lots or do we appraise only selected lots? Do we appraise only lots the specific sections/lots that Lake Holiday, LLC are initially interested in purchasing? One Board member suggested that we survey the LHCC members about their feelings regarding the sale of LHCC lots. The Management Office receives a report that lists all lots sold and the purchase price; this report could be used to establish a base for lot prices.

Many resources could have been used to establish the value of the Association’s lots. Did the directors actually use any of these resources or did they ignore what they learned? It’s simply not credible to sell appreciating real estate for a fixed price of $25,000 per lot when one has access to information on many transactions settling at more than twice that price.