You are here: Home / Archives for Tom-Wallace

A short but interesting open forum kicked off the June 23rd meeting of LHCC’s board. The Bemis case was on a few minds. A woman named Pat, a member of the Alliance to Save Lake Holiday, encouraged owners to send out emails to support the passage of Sen. Jill Holtzman Vogel’s now tabled special interest legislation. Pat’s effort to support a side in the case was confusing to some audience members, because Pat, as a member of the Alliance, is on both sides. She, like every Alliance and Friends of Lake Holiday member, is both a defendant and a plaintiff.

Here are some excerpts of the discussion:

Property Owner: Which position are you supporting, the plaintiff or the defendant? Because from what I understand you’re both.

Property Owner: They have also cross-claimed as plaintiffs.

Tom Wallace: That doesn’t mean anything except…

Property Owner: It means that they’ve cross-claimed as plaintiffs so they’re on both sides.

Tom Wallace: Only a few of them.

Wayne Poyer: That has nothing to do with plaintiff, that’s a cross-claim. But you are technically correct. We don’t consider…I don’t think anybody who has made a cross-claim or counter-claim considers themselves part of the plaintiffs’ group.

Property Owner: Then why are they cross-claiming?

Wayne Poyer: Because that’s what Judge Prosser asked us to do.

These 2 groups include many former directors, every past president in recent memory, and every current director except Ken Murphy. In other words, in a case alleging that LHCC, run by its directors, has illegally collected assessments not authorized in the owners’ deeds, 10 of 11 current directors who are charged with collecting those assessments have adopted the position that LHCC has collected and is continuing to illegally collect assessments not authorized in the owners’ deeds. If that sounds ridiculous, it’s because it is.

Both current LHCC President Wayne Poyer and Tom Wallace, a former LHCC director, are members of the Friends group. When Wallace replied “only a few” in response to the comment about the position taken by current directors, he was wildly inaccurate. He also failed to mention that he himself is a plaintiff against LHCC. Was his distortion intentional? Or have pleadings been filed in his name that he doesn’t have knowledge of or agree with?

The exchange shown on the video triggered an email from a homeowner to Wayne Travell, the attorney representing the Bemis plaintiffs. The homeowner was troubled by Poyer’s statement that he did “what Judge Prosser asked him to do.”

This just didn’t seem right to me. I don’t know much about law, but it seems to me this is out of line. 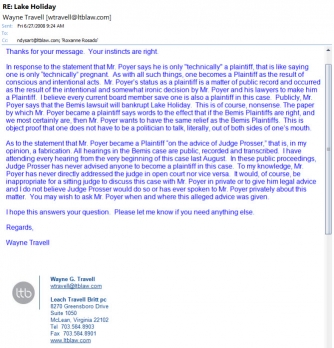 Travell responded that “Mr. Poyer has never directly addressed the judge in open court nor vice versa.” He added that he does not believe the judge has engaged nor would engage in private communications with Poyer.

Wayne Poyer openly told his own neighbors at a public meeting that the judge in an active case asked him to take a particular course of action. Poyer suggested his status as a plaintiff was just a technicality. Former director Tom Wallace didn’t candidly acknowledge he is a plaintiff and distorted that 10 of 11 current directors share that position with him. Even Alliance member Pat failed to mention that she is a plaintiff.

How can homeowners separate fact from fiction with leaders like these? 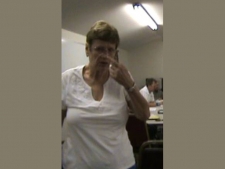 END_OF_DOCUMENT_TOKEN_TO_BE_REPLACED

It’s time for the LHCC Board to get ready for the October 2007 election, and that means creating a Nominating Committee.