The powers that be at Lake Holiday love acronyms, so we thought we’d try to use them to describe the results of the UEP voting.

Our headline says just about everything, but just to be sure: the UEP failed to win approval in every section. It wasn’t even close. It was a complete flop.

Here’s the results of the vote held on Saturday, August 18th: 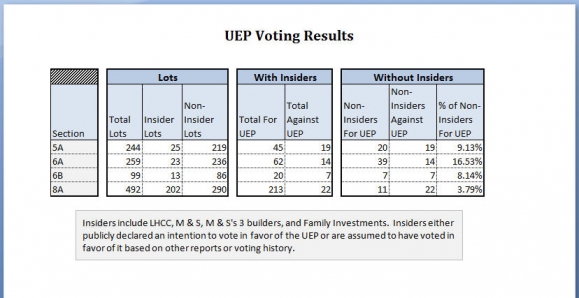 To better understand the results, we’ve provided the information on the number of lots owned by Insiders. We put LHCC, Miller & Smith, Miller & Smith’s builders (Eagle Crest, Oakcrest, and SK Homes), and Family Investments into this group. LHCC confirmed it voted its lots in favor of the UEP, and Chris Allison said Miller & Smith told him they planned to vote in favor of it.

When you deduct the votes of these Insiders, it’s easy to see how poorly the UEP was received. After deducting the Insider votes, just under 4% of the owners in Section 8A voted in favor of the UEP. Less than 4%. In the best case, the adjusted popularity of the UEP didn’t exceed 17%. The UEP was a terrible plan from the start. Hastily selling a terrible plan with some easily exposed lies produced an outcome that was predictable and clear: complete rejection.

LHCC did two mailings to hype the UEP, and held a lengthy public meeting. We didn’t do any mailings or hold any public meetings because it was very clear such an effort wasn’t necessary. We received numerous calls from frustrated Membership Lot owners, and just about every one was of the same opinion: the UEP was not a sincere and legitimate effort to extend utilities to their lots. LHCC went ahead with this ill-conceived plan despite its present cash crunch.

Dave Buermeyer presented the UEP to the full LHCC board of directors on Thursday, June 21. LHCC Secretary Ken Murphy suggested the board be given until the following Monday – just 4 days away – to more fully consider the plan, but Chris Allison attacked Murphy’s suggestion. Deliberating for 4 more days was unreasonable to Chris Allison. Submitting the plan to members was approved that night, and the next day almost two thousand packages were mailed.

Will LHCC’s directors ever learn that letting Chris Allison control the recipe will never produce a cake that anyone will eat?