You are here: Home / Archives for Proxmire

We’re going to award a Silent Sitter award to that board member that contributes the least at each board meeting in the hope that highlighting this bad behavior prompts potential Silent Sitters to change their conduct. We make it in the spirit of Sen. William Proxmire’s Golden Fleece award.

The November 12th board meeting to review and approve the 2008 budget is a good place to start. After the organizational meeting on November 5th, this was the first meeting to take up the business of Lake Holiday. Despite the fact that the board was reviewing 2008 expenditures that will exceed $2.275 million, the board meeting on the budget was the shortest meeting that we’ve watched on video, coming in at 38 minutes. Most of the discussion for the entire budget focused on how a single, unbudgeted $9,000 dock repair expense could be deferred or delegated to a committee. This lack of debate shows that the Silent Sitter race will be a close one.

LHCC VP Dave Buermeyer said next to nothing at the November 12th meeting. But in light of the nearby photo from that meeting, we can’t be sure if Dave Buermeyer was actually awake throughout. We don’t want to turn the award into the Sleeping Sitter. We also don’t think it’s fair to the other board members vying for our award to credit what little he did say at the meeting in light of our uncertainty over his sleeping status.

We also had to seriously consider Jo-Anne Barnard. Among Jo-Anne’s many qualifications to serve on LHCC’s board, she is LHCC President Wayne Poyer’s neighbor. She recovered somewhat from the “deer in the headlights” look she displayed at the board’s organizational meeting and managed to ask several questions. One of her questions helped clarify a caption on a budget line item. Unfortunately, substantive contribution requires more than debating captions. 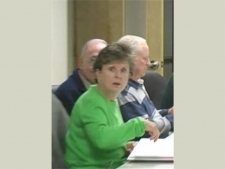 We also had to consider Suzy Marcus and Ken Murphy, who stayed true to their usual performances and contributed next to nothing. Had Noel O’Brien been in attendance, our decision may have been even more difficult since she’s expected to be a regular contender for our award. We’re sure these three will put up strong showings in future Silent Sitter contests.

Despite the close race, we give our first Silent Sitter award to LHCC board newcomer Rick Bleck, who did not meet the 1 year ownership requirement for nomination set forth in LHCC’s bylaws and was invisible on the campaign trail but was elected anyway. During the board’s organizational meeting, Rick Bleck managed to correct his own phone number on a board member contact sheet. That apparently talkative performance was not repeated on November 12th, when Rick Bleck was virtually silent. He didn’t question any element of the 2008 budget, nor did he suggest any change. When it came time to vote for the budget, he dutifully raised his hand. He fulfilled the role of a Silent Sitter to perfection. He questioned nothing and voted in favor of everything. Congratulations, Rick Bleck, the first recipient of our Silent Sitter award. We have to wonder: did his involvement peak very early? 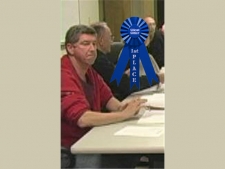 We think LHCC’s board erroneously believes that unquestioned unanimity indicates a good decision. In contrast, we believe that open, thorough examination of alternate and sometimes opposing views is a better approach. At the very least, those holding the minority view can take comfort in the fact that their position was given careful consideration and had a fair chance to capture support.

Another example of the perils of blind acceptance can be found in John Martel’s discussion of the balloon note used to finance the clubhouse remodeling, which is part of the above video clip. John Martel says that both he and the 2007 board have been criticized for committing LHCC to a balloon note. To directors operating reasonably, at a minimum criticism indicates an issue that should be carefully scrutinized. John Martel defends this decision:

We have a commitment from Wachovia that they will refinance the loan when it comes due in 5 years.

Unfortunately, the Promissory Note dated February 2, 2007 that John Martel himself signed doesn’t support his claim. That note provides for full repayment of all principal and interest by February 2, 2012 (which is less than 5 years away) and contains no language committing Wachovia to extend the loan. The Promissory Note itself states that:

Yet no director – especially not the Silent Sitters – saw fit to ask John Martel if he had that commitment in writing. Apparently, they accepted his unsupported statements as fact. LHCC’s board operates on the principle of “don’t question – just blindly accept.” Silent Sitters are an important component of this “question nothing-act unanimously” culture.

Lake Holiday owners pay a price for Silent Sitters. A portion of that price is the higher dues discussed in the above video and unanimously approved by LHCC’s board. Lake Holiday does not have a board of 11 people who independently and critically evaluate information. Instead, it has a board packed with Silent Sitters that gives the community the illusion of an independent and thoughtful governing body yet keeps power in the hands of a few.