You are here: Home / Archives for Haines 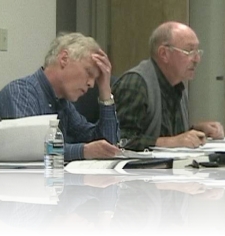 The April 28th was long – over 3 1/2 hours, not counting an executive session. We’ve included all but about 15 minutes of that meeting, spread over 26 video clips.

Review of a new front gate contract took about 5 1/2 minutes, but review of a $1500 reimbursement for additional lifeguard open water rescue training took over 30 minutes. The latter issue apparently stemmed from roving patrol/lifeguard supervisor Zeb Brevard, rather than the board, authorizing an expenditure made by the parent of one of the lifeguards.

Just because review of the front gate contract took 5 1/2 minutes doesn’t mean there was serious review. The board rubber-stamped GM Ray Sohl’s recommendation of keeping the contract with Haines at a cost of $15 per hour rather than accept a much lower cost proposal from Spartan at a cost of $13.33 per hour. The potential savings from Spartan’s proposal? About $15,000. The board couldn’t spend a lot of time on this $130,000 contract because it had to have enough time to discuss a contract with the lifeguards requiring them to reimburse the $100 training cost if they failed to work the entire season. At one point, presumably just to shorten a ridiculously long (or was it just ridiculous?) discussion, an audience member volunteered that he would reimburse the $100 training cost if that event occurred.

For the monthly staples, Martel gave the Treasurer’s Report and GM Ray Sohl gave the Management Report. Martel also put forward a motion to fully expense rather than capitalize all of LHCC’s depreciable assets. No director asked whether that was GAAP-compliant. For that matter, no director asked what GAAP is.

Dave Buermeyer gathered up some projections from Miller & Smith and some boxes of old documents. He rolled them into his Vision 10, a plan for the next 10 years at Lake Holiday. It drew applause from the board, which is the only group that will pay any attention whatsoever. Buermeyer also brought back more modifications to a policy to fill board vacancies. Secretary Ken Murphy secured approval for a new Rules Tracking System. At least they’ll look pretty. Early topic of the video: picking the right font. We’ll state the obvious: when a simple community association has to have a rules tracking system, it has too many rules. The board also approved a motion to hire a new collection agency, Debt Recovery Bureau, to try to collect old LHEUC debts on a contingency basis. According to Ray Sohl, these debts are outside the 3 year statute of limitations, and 1 firm has already tried a similar approach and given up after about 2 months.

On a positive note, director Steve Locke brought up negative communications relating to architectural compliance during the Committee & Task Force Reports. He was critical of his own experience and said the board needed to find a “much more neighborly way of going about things.” He thought “a little conversation would have gone a long way.” Perhaps his wife Deborah is working with him to try to develop a “kindler, gentler” side rather than the pseudo-tough guy tactics he displayed in our Keep It Over Here Punk video. Imagine: one LHCC director thinks “a little conversation” with an adversary could go “a long way.” Believable? Enduring? Let’s wait and see.

In earlier meetings, the board concluded that LHCC lacked the money to install guard rails, a safety issue, but evidently the money is there for the GM to solicit proposals to improve the acoustics at the clubhouse. Safety, no. Better acoustics for board members to hear themselves talk, yes.

The biggest topic of the night: re-financing the clubhouse loan. GM Ray Sohl started the discussion by stating that the “Board of directors has expressed an interest in re-collateralizing the existing clubhouse loan.” Oddly, there’s no expression of such interest during open meetings. Since the board voted on a motion to direct the GM to get bids on changes to the clubhouse acoustics, why is there no approved motion to direct the GM to investigate refinancing the clubhouse? This is just more evidence of the backroom discussions that Wayne Poyer denied the existence of when questioned by Bill Masters at the February Round Table.

In a sometimes heated debate, the board decided what to do about the fact that it pledged common assets without first obtaining 67% approval of the membership. To those who say the board never violates LHCC’s governing documents, this is just 1 example. The board acknowledged it didn’t follow LHCC’s governing documents on one of the largest transactions in Lake Holiday’s history. Jo-anne Barnard expressed the view that had she been given a chance to vote to incur a big mortgage to remodel the clubhouse, she would have chosen not to do so.

According to some board members, to fix things would require:

The hold would prevent LHCC from using the money. The board’s fix relies on an artificial distinction between “common area” and “common property.” Mortgaging the clubhouse without member approval was wrong because the clubhouse is “common area,” but mortgaging 91 lots without member approval is acceptable because these lots, according to the board, are something entirely different – “common property.” The extended debate is covered in a total of 9 parts, the first 8 of which include the discussion and the last of which includes the final vote.

Several directors expressed the view that the fix was expensive at a time when money is tight and the damage from violating LHCC’s governing documents can’t be undone. The decision: put the issue to retroactively approve pledging common assets to a member vote (which will almost certainly fail, as Poyer himself acknowledged), and if it fails, to enter into the refinancing, probably in early 2009. Martel asked that the record reflect that this decision to refinance is a breach of directors’ fiduciary responsibility, and when Poyer objected to the minutes reflecting Martel’s comments, he withdrew them. Not to worry, John Martel. The record of your inability or unwillingness to stick to your position is amply reflected on YouTube.

We extend our continued thanks to Bill Masters for his unflinching efforts to let property owners monitor the conduct of LHCC’s board. Despite the board’s talk of openness, they blocked Masters’ videographer from the boardroom on the grounds that he wasn’t an LHCC member. Property owners should be deeply troubled by a board that blocks openness and at the same time denies it is doing such blocking.

During March, The Haines Agency, a Stephens City-based security firm began providing personnel for Lake Holiday’s front gate. Their friendly staff is a nice addition to the community. We think it is important to look at the process by which the board of directors made the decision to select Haines.