You are here: Home / Board Conduct / Suzy Marcus, Silent Sitter

Rick Bleck, who did not meet the 1 year ownership requirement for nomination set forth in LHCC’s bylaws and was invisible on the campaign trail but was elected anyway, was absent from the December 27th meeting. Rick was the two-time defending champion (if that’s the right phrase) in our Silent Sitter contest. In fact, up to this point, Rick has won every Silent Sitter award we’ve given, since we’ve only given 2. We’re not sure if he was busy or has a strong sense of fair play that required him to give another director the chance to win the Silent Sitter award. 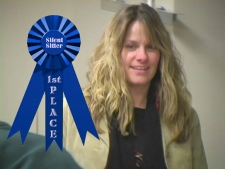 Given a fair chance, somebody other than Rick Bleck did win our Silent Sitter award. That person is Suzy Marcus. Congratulations, Suzy! You’re our Silent Sitter for the December 27th meeting. Ever since we copied the idea for the Silent Sitter award, we just knew that as long as she showed up, Suzy Marcus would put in a strong showing. The video clip Oops We Goofed (also linked in our post Twenty Certified Letters Later… and on our Videos page) pretty much includes Suzy Marcus’s entire contribution at a meeting that was well over 2 hours in length. In other words, if you don’t count silence, she didn’t contribute very much. When you consider that board members get their board books in advance of the meeting so they can show up ready and prepared to contribute, there’s simply no excuse for that much silence.

Suzy was absent from the 11/26 board meeting, at which she was responsible for presenting an “Open Discussion on Realtor Outreach.” Presumably, she was planning to lead a discussion of ways to help market the Lake Holiday community to real estate agents. When she was absent in November, this topic was moved to December. Perhaps she forgot about her own agenda item. We didn’t. Any benefits from a realtor outreach have now been delayed for 2 months. Sellers may not take kindly to a board that talks tough about a challenging real estate market but when it’s time for action only procrastinates. Chalk it up to having Silent Sitters on the board.

We do have sympathy for Rick Bleck, Suzy Marcus, and every future Silent Sitter. It’s very difficult to break out of the Silent Sitter role, as our video Only 3 For the DEC demonstrates. The DEC is LHCC’s Development Executive Committee, and this committee is where the important stuff happens. As Wayne Poyer explained in the following video, the DEC manages the relationship with Miller & Smith, the biggest developer at Lake Holiday. The DEC also handled the initial relationship with potential golf course purchasers and developed the Utility Extension Program (UEP). In other words, it plays a lead role in critical development issues at Lake Holiday before these issues ever reach the board.

After Wayne Poyer described the DEC at the board’s November organizational meeting, a number of directors jumped at the chance to serve on this important committee. Directors Noel O’Brien and Robin Pedlar, two directors who could challenge for a Silent Sitter award in any given month, wanted to serve. But alas, after offering the tease of what the DEC got to work on, Wayne Poyer explained that there are only 3 seats on the DEC. Without further explanation, these potential Silent Sitters who wanted to contribute just had to understand that Wayne Poyer, John Martel, and Dave Buermeyer would take over the DEC. Is it unusual that 3 men appear to just assume they should dominate this committee and 2 women appear to just understand that this committee is not for them?

Why aren’t Noel O’Brien and Robin Pedlar on the DEC?

Chris [Allison] has a real problem with women. We don’t have brains. Our opinions don’t matter. He’s not going to give her the time of day.

Silent Sitters like Suzy Marcus and Rick Bleck have to overcome more than any general reluctance to contribute. They’re fighting against a highly concentrated leadership that blocks them from tackling important tasks.

As much as board members may claim to dislike our Silent Sitter award, the powerful few cherish the existence of Silent Sitters like Suzy Marcus.