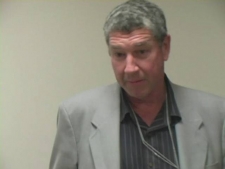 Rick Bleck, who did not meet the 1 year ownership requirement for nomination set forth in LHCC’s bylaws and was invisible on the campaign trail but was elected anyway, resigned from LHCC’s board on January 30th. Bleck, aka the “Bleckster” (see his own email address), sent a resignation email to Wayne Poyer. He resigned essentially the day after attending the January board meeting which included an Executive Session focused on LHCC’s litigation issues. He wished the remaining board members “Good Luck to all with this one” and with that, he was gone. He may not have left a lasting impression, since GM Ray Sohl mistakenly identified him as “Bill Bleck” when forwarding his resignation email. Maybe the community that allegedly elected Bleck to the board didn’t leave a lasting impression on him either. In 2 instances he referred to Lake Holiday simply as “Holiday.”

We suspect Bleck was duped to keep his name on the 2007 ballot even though he didn’t meet the nomination requirement to block the election of Bill Masters. Masters has been critical of the board, and the board is intolerant of criticism, however justified. Caught in a place where he would not be able to make a meaningful contribution or independently become familiar with the challenges facing Lake Holiday, Bleck would have little more than a marginalized role on LHCC’s board. However, Bleck himself opted to take on this marginalized role by allowing his name to remain on the 2007 ballot after he learned of a legitimate challenge to his nomination. Although he put himself in a difficult position, he should have stuck it out. 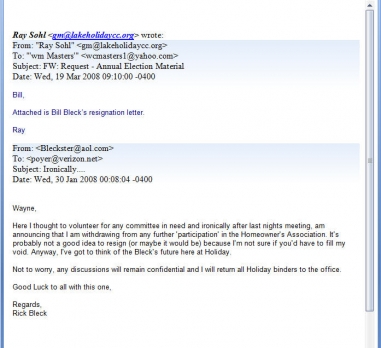 At the March 27th board meeting, LHCC’s board decided to appoint Bleck’s successor. The deadline for expressing an interest to serve was March 18th, and only 2 prospective candidates responded by that date: Bill Masters and Mike Sweeney. Just as with Bleck’s nomination, there’s a big problem here. Mike Sweeney is the husband of Robin Pedlar, one of LHCC’s current directors. LHCC’s Articles of Incorporation contain this simple sentence:

A Lot shall not have more than one membership, but the single membership shall be shared by all owners of the lot.

Since Robin Pedlar and Mike Sweeney jointly own only 1 property at Lake Holiday, there’s only 1 possible membership in LHCC to go around. But to serve on LHCC’s board, one must be a member. Robin Pedlar is already serving on the board, so she must be a member. That leaves no membership for Mike Sweeney. Case closed. Not so fast. Wayne Poyer said he reviewed this issue “quite thoroughly” and that usually translates to getting a legal opinion to trick trusting owners that this is somehow, someway legitimate. Here’s that legal opinion from Juan Cardenas of Rees Broome as read by Wayne Poyer:

Assuming Mr. Sweeney is a member of LHCC and in good standing, he is eligible to serve on the board of directors per the Bylaws. The fact that he is a co-owner of a lot with Ms. Pedlar does not invalidate his eligibility to serve, nor would it affect his right to vote on matters as a member of the board on matters before the board of directors as the Bylaws do not regulate, much less prohibit, the possibility of two or more co-owners of one lot serving on the board at the same time. The Bylaws make clear that Mr. Sweeney and Ms. Pedlar share voting rights with respect to their lot as members of LHCC on matters before the membership, as only one vote is assigned to each lot regardless of the number of co-owners. But again, this point does not affect the issue of eligibility to serve on the board. I hope this further explanation is helpful. (emphasis added)

Bill Masters challenged whether Mike Sweeney is a member of LHCC, and he specifically referred to that statement under LHCC’s Articles of Incorporation. Cardenas avoided all mention of the Articles and instead tried to focus attention on LHCC’s Bylaws because there’s no way around the unambiguous statement in the Articles. His opinion has a more fundamental flaw. He assumed the very result he should have been asked to evaluate, whether Mike Sweeney is a member of LHCC. Given that Robin Pedlar is an existing director and thus a member, LHCC’s Articles make clear that Mike Sweeney is not a member of LHCC. Therefore, as long as Robin Pedlar is using that membership by holding office, Mike Sweeney is ineligible to serve on the board. We suspect that Mike Sweeney himself knows that this arrangement doesn’t pass the laugh test. That’s why he put the onus back on the board and expressed the hope that the board “reviewed all the documents” and would act in “good conscience.”

We also wonder why Cardenas filled his opinion with arguably true statements that are totally irrelevant to the real issue of whether Mike Sweeney is a member of LHCC. Did he do this as a slight-of-hand trick to draw attention away from his circular logic? Did Wayne Poyer accurately frame the question to Cardenas or read Cardenas’ entire response to the board? We may never know. What we do know is that the LHCC board will blatantly violate its own governing documents without blinking an eye. 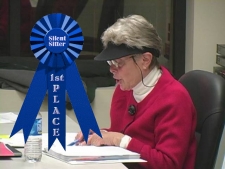 During the vote to appoint Bleck’s successor (the first part of which is covered in the above video and the second part here in Breaking the Rules Pt 2, Robin Pedlar abstained and gave no reason for her abstention. We doubt that she needed to explain to other directors that Mike Sweeney was her husband. However, given that Robin Pedlar and Mike Sweeney have different surnames, that fact may not be obvious to the rest of the community. She had a tough choice: be silent or make it crystal clear that she is Mike Sweeney’s wife and explain her abstention, which would have only drawn attention to the illegitimacy of Sweeney’s appointment – attention that clearly LHCC’s directors did not want. Given a tough choice, a Silent Sitter will usually choose to keep silent. Congratulations, Robin Pedlar! You’re our Silent Sitter award winner for the March 27th board meeting.

Robin Pedlar is our 6th Silent Sitter award winner, and the 2007 board is about half-way through its tenure. We thought it was time to create a Silent Sitter page honoring all the winners, with a little background on the award itself.

If your own wife can’t openly vote in favor of whatever you’re trying to do, there’s a problem with it. And she knows it.