You are here: Home / Board Meeting / Ray, Ray, Ray…Please

I have a couple of questions, Ray, and I have one more than I had before you started talking.

Martel finds it “troublesome” that about 72% of a contingency budget for remodeling the clubhouse has already been allocated after only 2 months of a 6 month project.

We’ve got to manage to our budget this year. Last year, we…we didn’t do a very good job of it.

Toward the end of the video clip director Chris Allison said that he defines “extraordinary” as an amount over $5,000. General and collection-related legal fees for 2006 were a whopping $448,000 over budget. Four other over-budget categories were about $72,000 – or 110% – over budget. How does Chris Allison define those amounts more specifically? Super-duper ridiculous? Martel’s comment understates the obvious: the directors did a terrible job of sticking to the 2006 budget they approved.

Want more proof? The table below compares 8 expense categories in 2006 that represent just about all non-capital expenditures. The directors spent over budget by the huge sum of $623,000, or by 53% 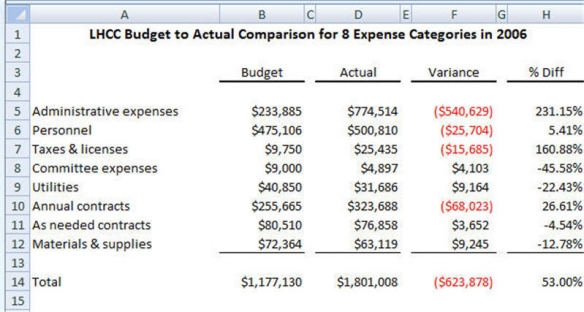 Martel questions whether allowing 1 individual to approve spending more than the budgeted amount is “consistent with our governing documents….”

Perhaps he was thinking of Article XI Section 7(d) of the LHCC Bylaws that defines his responsibility as Treasurer:

The Treasurer shall be responsible for … (b) disbursing such funds as directed by resolution of the Board of Directors….

Martel’s sense in the boardroom was on the money. The budget is approved by the board. No one individual can authorize exceeding the budget. It takes a resolution of the board. But in his responses to a series of questions submitted by homeowner Bill Masters, Martel repeats a completely contradictory position 6 separate times:

There is no requirement in Virginia law or the Association’s governing documents for specific Board approval of expenses that deviate from the budget.

Hopefully, Martel will reconcile his contradictory position before he gets more frustrated. Or the money runs out.