You are here: Home / Board Conduct / Quick Takes on the March 27th Board Meeting 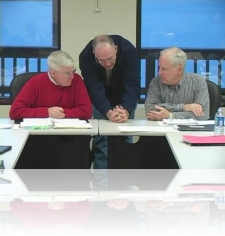 Here’s our quick take on the March 27th board meeting. We now include video thumbnails directly in posts. If you click on the thumbnail, a video player will pop up and begin playing the video. Look for this feature in future posts. If you have problems using this feature, make a comment on our Help page.

We’ve uploaded 15 videos from the March 27th meeting, representing over 1 1/2 hours of about a 2 hour meeting.

One of the first orders of business: fill the board seat vacated by Rick Bleck, who did not meet the 1 year ownership requirement for nomination set forth in LHCC’s bylaws and was invisible on the campaign trail but was elected anyway. There were 2 candidates: Bill Masters and Mike Sweeney, who is the husband of board member Robin Pedlar. 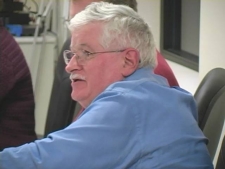 LHCC’s own Articles include the requirement that “A Lot shall not have more than one membership, but the single membership shall be shared by all owners of the lot.” Since Robin Pedlar is a director, she must be a member. If there’s only 1 membership for a lot, there’s no membership opportunity left for Mike Sweeney. LHCC’s directors get around that major roadblock by obtaining a legal opinion from Juan Cardenas of Rees Broome. That opinion starts out “Assuming Mike Sweeney is a member of LHCC….” As far back as Aristotle in 350 B. C., this con job has been understood to be a logical fallacy, often referred to as “circular reasoning.” Check it out: Assuming pigs can fly, then pigs can fly. Use it, like Wayne Poyer did, to impress passive directors and gullible neighbors. Just don’t actually try to fly, because that will expose the fallacy pretty quickly. Buermeyer gave a speech intended for the camera that encouraged diversity on the board yet offered Masters the hope of joining the board only if he became a clone of Buermeyer himself. Buermeyer and Pedlar abstained; Murphy and Marcus avoided controversy by skipping the meeting. Task #1: pass a resolution to make the vote on this charade an open vote. Watch LHCC’s rules trampled on and tossed away in these 2 clips, Breaking The Rules Pt 1 and Breaking The Rules Pt 2. This action shows the board will recklessly violate LHCC’s own governing documents to keep its grip on power.

GM Ray Sohl gave the management report, Mar 08 GM Rpt Pt 1 and Mar 08 GM Rpt Pt 2, in which the topic of the effectiveness of the Roving Patrol was raised. Is it effective? The board moved that question to Executive Session, so members will never know just what the roving patrol led by Zeb Brevard, the roving patrol supervisor, actually does all day. Treasurer John Martel, who sometimes struggles with accounting issues, offered a friendly health tip in his Treasurer’s Report. Wayne Poyer raised a concern that an owner/builder was possibly blocked from using white garage doors, which should automatically be approved, in our clip Garage Doors and asked Judy Platt about stocking the lake with non-native fish.

There have been 2 serious accidents on West Masters Drive, so the topic of guard rails (Guard Rails Again Pt 1 and Guard Rails Again Pt 2) came up again. We’ve heard reports that a driver was very seriously injured, perhaps paralyzed, in a recent accident on West Masters. If guard rails had been installed, the seriousness of these accidents may have been reduced. Steve Locke did offer a suggestion: put up caution tape. Action on the guard rail issue was “tabled” because of LHCC’s “serious financial headaches.” Estimates for dam culvert work (just 1 part of a much bigger project) came in at approximately $175,000 compared to a budget of $45,000. This $130,000 surprise didn’t find its way into Wayne Poyer’s April 2008 President’s Report, which discussed dam costs.

Changes were made to construction guidelines, apparently requiring a member to be in good standing for all properties owned, rather than the property for which construction approval is applied, before approving new construction permits. If allowed to stand, this will just about kill any new construction at Lake Holiday. The board also discussed taking more aggressive action against serious compliance violations. That could mean spending more money on lawyers at a time when money is in short supply. With her husband’s help, Robin Pedlar outlined the plans for 2008 social activities and suggested that LHCC in effect have a second set of books to get around the troubles created by accrual accounting. Directors seemed comfortable they could find a way to shift expenses from one time period to another to make everything work. 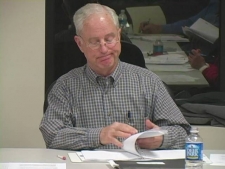 Dave Buermeyer led a discussion of changing LHCC’s water conservation rules, but most of that discussion focused on eliminating the single word “services” from a motion actually made by Jo-anne Barnard. Barnard was concerned about expressing positive comments about Aqua Virginia’s services when there have been so many complaints from Lake Holiday homeowners that Aqua Virginia’s service is “not at an acceptable level.” Buermeyer lost control of his own topic, and in the end, voted against the resolution he presented. John Martel seemed to have no idea what he just voted on, since he voted against Buermeyer’s resolution but said that he wanted the resolution to pass. Maybe that one word “services” was the glue that held everything together. Maybe some would pout and block their own ideas if they couldn’t have it their own way.

The Middleton story that we previously covered has recorded a new chapter, after he put “No Trespassing” signs on his property. Wayne Poyer vowed to “do it much more crisply than we did the last one.”

We’ve also added a link on our sidebar to SchoolMatters, a Standard & Poors website with test scores, demographics, district finances, parent reviews, and other information on schools nationwide. It’s easy to compare schools. Our link is for Frederick County, VA schools. Check it out.