The October 2006 election was a sham.

Comparing the October 2006 election results to the 2 most recent elections in Lake Holiday history arouses suspicions.

In June 2006, the entire community was focused on major overhauls to governing documents. Voting interest was at a record high. The June 2006 election results show that 760 or more eligible members voted on the proposed Bylaws and the proposed Articles of Incorporation. But for the October 2006 election of directors, over 800 eligible members voted in an event that most would describe as not attracting a lot of interest. In fact, the number of in-person votes cast at the October 2006 election actually declined from October 2005. This year’s election attracted only 7 announced candidates, compared to the 17 running for office in 2005. How did participation in an election of directors that by every measure captured little attention exceed interest in a total re-write of the rules governing the Association?

Consider the candidates running for the Board. Dave Buermeyer and Noel O’Brien were candidates in the October 2005 election. In October 2005, Buermeyer captured 158 votes and failed to win a board seat. O’Brien received 167 votes and was declared a winner. But in October 2006, just 1 year later, Buermeyer was credited with 527 votes and O’Brien with 497. Is it believable that the popularity of these candidates more than tripled, despite the fact that they’ve been nearly silent and invisible on the Board?

So what produced the reported voter turnout?

Chris Allison allowed Miller & Smith and its builders to vote 114 Trust lots that aren’t even Association members, as well as lots in Section 7 that are ineligible to vote based on the terms of the Development Agreement. These lots were ineligible to vote in the October 2005 and June 2006 elections. Up until November 11th the Section 10 lots were correctly marked “non-voting” on a Lot Distribution List posted on LHCC’s own website. But on that date, this Lot Distribution List was removed from LHCC’s website – just days after we asked questions on this topic in several depositions of current and former LHCC officers and employees. In effect, Chris Allison ran a vote printing press to manufacture enough votes to control the election, and then he proceeded to cover his tracks. 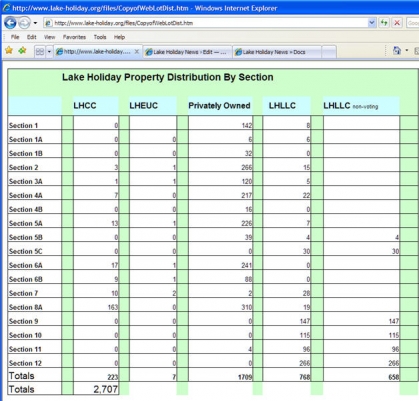 Voting of the Trust lots at Lake Holiday needs to be understood in the context of 2 documents: the 1984 Settlement Agreement and the Declaration of Covenants filed by Independence Land in 1984. This Declaration of Covenants is recorded in the land records of Frederick County. The 1984 Settlement Agreement states that it “is incorporated herein by reference and made a part hereof.” Miller & Smith is the successor to Independence Land and has claimed certain benefits under this agreement, such as not paying dues.

Paragraph 2 of the 1984 Settlement Agreement between LHCC and Independence Land states:

The importance of this provision cannot be understated. It goes beyond an agreement that Miller & Smith will not vote the Trust lots. As an owner of these lots, it is not even a member of the Association. Miller & Smith does not have the option to elect to pay dues and establish membership, and therefore acquire the opportunity to vote. The phrase “shall not be a member” is equivalent to “must not be a member.”

any entity purchasing two (2) or more lots for development in the Independence Land Property in any single transaction or related series of transactions.

The Declaration establishes that the inability to become a member and to vote applies to Developers, as defined. Miller & Smith’s builders are ineligible to be members and ineligible to cast votes for Trust lots because they meet this definition. Once a property is transferred to an owner “other than a Developer” (i.e., a homeowner), that owner must become a member of the Association and begin paying all fees and dues.

However, in the October 2006 election, 2 Developers, SK Homes and Eagle Crest, cast votes for their Section 10 lots which were improperly accepted as eligible.

Allowing non-members to vote in the October 2006 election impacted the makeup of the Board. Fair play says this needs to be fixed right away.

Our characterization that membership – and therefore possible voting eligibility – begins after a home is constructed and purchased is exactly what was presented to members at a Development Q & A Session in 2003. Board members and counsel for LHCC answered questions from members about how Miller & Smith and Oakcrest (identified as “M/S/O”) would behave. The answer to Question 13 on Page 2 from Stephen Moriarty, then counsel to LHCC, is right on point:

Q: Question is this: when will each M/S/O lot start paying these assessments? When a house is started or upon the sale of the house or lot to a private individual?

A: Upon the sale of the lot to individuals. Developer will build houses and memberships will begin when the lot is closed on and the owner becomes a member of LHCC.

This is the same answer given by then (and current) director Pat Shields in Question 9:

A: Absolutely. At the time the house transfers from the developer to the property owner, they will begin paying dues and water usage fees.

Does current Director Pat Shields not recall his own explanation?

According to Chris Allison, allowing Miller & Smith to vote the Trust lots did not come before the Board, because it “was and is not a Board issue.” Apparently, he feels he alone can make these decisions.

Do the current directors of LHCC have the spine to stand up to Chris Allison and address election fraud? Will they support fair play or will they remain silent and support fixing elections?