LHCC’s proxy policy was one of the most important topics discussed at the December 27th meeting. The board uses the proxy policy to unfairly restrict the opportunities that LHCC members have to express their opinions in elections. This policy is one of the board’s principal weapons to attack what it calls “the dissidents.” Using characteristic put-downs, the board describes those who vote by proxy as “less sophisticated.” 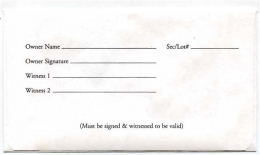 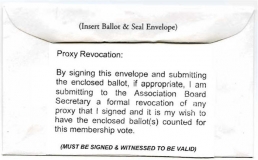 As used by LHCC, the proxy policy is nothing more than an election manipulation tool. Let’s review the 3 most recent LHCC board elections to understand what has changed and why. In each of these elections, the final outcome of who sits on the board would change based on the resolution of these challenges.

In the October 2005 election we solicited proxies almost exclusively from Membership Lot owners. Our success in capturing votes surprised LHCC’s leaders. Several facts from the 2005 election stand out:

The election results were very close, too close from the perspective of LHCC’s entrenched board. Our votes were almost all in the form of proxies. So LHCC apparently concluded it was time to develop a way to disqualify proxies before the next election. If LHCC’s directors could disqualify proxies, they could reduce our votes.

Before the October 2006 election ever took place, LHCC knew we would show up with over 400 proxies. We presented these proxies in the governing documents vote in June of 2006, so LHCC knew exactly what to expect that October. LHCC’s directors had to act, or they might have been voted out of office. Before the October 2006 election, LHCC adopted the policy that submitting any absentee ballot revoked a proxy, even if the proxy were executed after the absentee ballot was presented. This was the beginning of the proxy policy as a political tool.

All nominees must have been Members of the Association for at least one (1) year.

Bleck closed on his Lake Holiday home on October 12, 2006. The cutoff for nominations was September 5, 2007. Bleck obviously didn’t meet the 1 year requirement spelled out in the Bylaws. This presented a serious problem to LHCC’s entrenched board because it will go to just about any length to block Masters from winning a board seat. If Bleck’s nomination were found to be improper and therefore withdrawn, that would leave only 6 candidates – one of which would be Masters – running for 6 seats, virtually guaranteeing Masters a board seat.

The solution to this problem: pay LHCC counsel Rees Broome to produce a 3 page letter to try to explain that that 1 sentence in the Bylaws means something other than what it says. Reader beware: have a big bottle of aspirin handy before reading Rees Broome’s explanation because trying to follow their logic will cause your head to rotate more than once on your shoulders. Rees Broome has been the recipient of checks totaling hundreds of thousands of dollars, signed by LHCC’s entrenched board.

In the October 2007 we supported Bill Masters, who solicited proxies from Lake Holiday property owners. Masters added a new wrinkle to the proxy debate. Because of the cost of soliciting proxies, Masters solicited proxies good for 5 years. And that apparently scares LHCC’s directors.

So how did LHCC respond? By using association funds and resources to conduct a poorly disguised political attack on Masters. Mailed in an official LHCC envelope with a hard-to-miss yellow sticker claiming to hold “Important Information”, LHCC directors spent Association money to send out in early October what was nothing more than a blatant political campaign letter.

LHCC’s mailer attacked proxies generally and the Masters proxy in particular. The mailer also attacked Masters’ campaign positions. Amusingly, the letter misquoted one of Masters’ own campaign letters and falsely claimed that Masters’ calculation of the expected dam repair cost was wrong. Masters used actual numbers from the board meeting on the dam repair and did nothing more complicated than dividing the estimated total cost of the dam repair by the number of property owners actually paying dues. After misquoting the number in Masters’ letter, LHCC’s response was that “No arithmetic we know of gets to this number.” More simply: LHCC’s directors acknowledged they don’t know how to do basic arithmetic.

Three candidates, who also happened to be incumbent officers or directors – President Wayne Poyer, Treasurer John Martel, and Pat Shields – used association resources to mail out their own political response to candidate Masters, who used private resources to pay for his campaign. Wayne Poyer, John Martel, and Pat Shields failed to separate their roles as officers and directors of the association from their personal interests as candidates for re-election. At the bare minimum, they should repay the full cost of this political mailer. We challenge them to do so.

That’s the background for December 27th’s proxy policy discussion, which we present in 4 video clips:

At the meeting, all directors except VP Dave Buermeyer favored allowing proxies. Buermeyer continued to be against allowing proxies even though LHCC has a legal opinion from Steve Moriarty, former LHCC counsel, that proxies must be allowed. Pat Shields cautioned Buermeyer that “we need to follow our lawyer’s advice.”

Revoking an absentee ballot also shows a sloppy inconsistency in LHCC’s voting procedures. In September of 2005, LHCC was planning to hold a vote on new governing documents. At that time, we challenged in court LHCC’s refusal to let members change their absentee votes. LHCC subsequently canceled that scheduled vote and revised its procedures for revoking an absentee ballot. Those changes are reflected in the minutes of the 9/27/05 board meeting. The revised policy states that:

Eligible Members exercising their right to vote an absentee ballot retain the option of changing that absentee vote up to the deadline for all voting. Once an absentee ballot has been witnessed, mailed to and logged in by the office or registered agent, to change that vote the Member must attend the Membership meeting called for the purpose of that vote and, providing proper identification, request that the ballot be recovered for the purpose of recasting the vote.

That policy was adopted in the 2005 election. By 2007 it was abandoned. Compare the note at the bottom of the 2005 ballot to 2007’s version. 2005’s ballot says: “If you desire to change your absentee ballot you must do so in person at the annual meeting on October 22nd, 2005.” 2007’s ballot says: “Once submitted, this Absentee Ballot may not be retracted or changed.” The message from LHCC’s directors to members: Once we have your vote, we’re not giving it up. 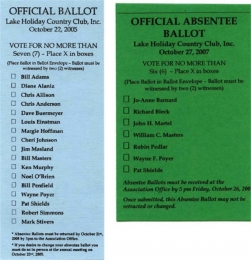 The proxy policy also is an attempt to modify LHCC’s Bylaws by board resolution. LHCC’s directors would like to require directed proxies, where the proxy spells out how the proxy holder will vote. Requiring directed proxies blocks unannounced floor nominations. If a candidate to be nominated on the floor is announced in advance, LHCC can discourage that candidate from accepting the nomination. But there’s no requirement that proxies be directed in either LHCC’s Bylaws or in Virginia’s Non-Stock Corporation Act. Wayne Poyer clearly understands that the Non-Stock Corporation Act places few restrictions on proxy use. He described the flexibility that the law puts on proxies to his fellow board members: “the back of an envelope is quite fine.” So what’s an entrenched board to do? Amend LHCC’s Bylaws without the required member vote and circumvent the act by passing a board resolution.

Above all else, LHCC uses false claims about proxies. At the December 27th meeting, Wayne Poyer said some voters gave up their vote for 5 years. That’s absolute non-sense. The proxy that Bill Masters solicited from property owners was revocable at any time by the person that granted the proxy. Revocation could be accomplished by something as simple as sending an email to the proxy holder.

The other false claim is that a proxy granter has somehow given up his vote. That view is expressed in the title of the board’s political attack on Masters: “Its Your Vote – Keep It.” Voting is expressing an opinion, and proxy granters have made a decision to express their opinion by executing a proxy. They have elected to work together to improve their chances of winning an election. There are legitimate reasons for voters to work together and vote by proxy. Voting by proxy gives someone other than LHCC’s board the ability to verify the accuracy of a vote. If 400 voters vote individually, the task of confirming that their votes were counted correctly is insurmountable. If 400 voters vote by proxy, that task becomes simple. LHCC’s directors apparently would rather members act in an isolated manner, have no chance of winning an election, and have no chance to independently verify their votes were counted properly. To keep power, try to divide the opposition.

It’s time for LHCC to clean up its elections.

Until LHCC’s directors implement these changes to election rules, the community’s elections will continue to take place under a cloud of suspicion and mistrust.