You are here: Home / Board Conduct / A Summit Prophesy

At the January 26th board meeting, homeowners Terry & LeeAnn Stevens questioned whether board members actually receive communications from property owners. Based on their sharp words for the board and GM Ray Sohl, our use of the word “question” is a dramatic understatement. Judge for yourself in the following video, in which LeeAnn criticized Ray Sohl’s “half-assed responses:”

With the issue of communications to directors fresh in our minds, we decided to take a look back and thumb through a former director’s original board book. It was chock full of numerous goodies, the kind of things that some directors seem to want to hide from members. One document was a prophetic 2001 email from homeowner Bob Pumphrey to then LHCC President Frank Heisey. Pumphrey asked Heisey to “change the management” and stop condoning “violations of state and county laws….” He offered this cautionary warning:

…if these conditions continue, we will have another Summit war in less than five years. This one will be worse than the last as it will be neighbor against neighbor. 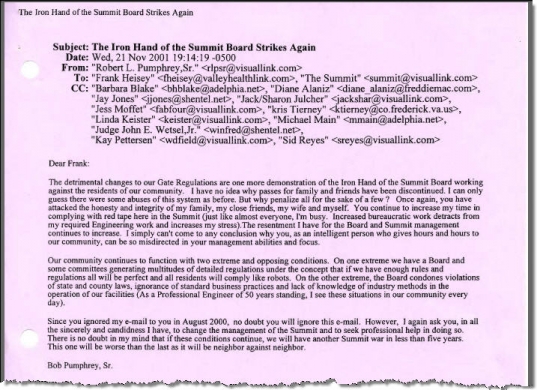 Reading Pumphrey’s email triggered another memory: a Frank Heisey soliloquy to the board in which he was critical of a handful of “uncivil property owners.” He claimed to have addressed those he criticized “personally.” We’ve never received any personal communication from Heisey. We checked with Bill Masters, someone we suspect Heisey might label “uncivil.” Nope, Heisey never personally addressed these issues with him either.

Maybe Heisey finally got back to Bob Pumphrey? It’s only been over 6 years.