You are here: Home / Board Conduct / Ushered Out of the Office To a Salary Increase and Bonus 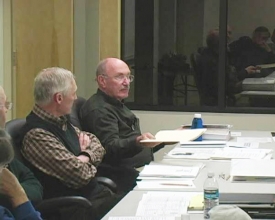 Paying attention to body language is critical to understanding people. Folding one’s arms across the chest, especially when combined with leaning or turning away and avoiding eye contact, is thought by many to show rejection of the person or the person’s message. Think of it as one big push off.

LHCC’s board reviewed the compliance report prepared by GM Ray Sohl at the regular November board meeting.

Watch Ray Sohl’s body language when LHCC President Wayne Poyer attempted to hand him a folder of items he’d like addressed. Ray Sohl made no effort to reach for it, leaving Ken Murphy to take it from Poyer and try to pass it to Ray Sohl. Count the seconds while Ken Murphy holds the folder in space, waiting for it to be accepted by its intended recipient. The actual time may only be a few seconds, but if you are in Ken Murphy’s position, not knowing when if ever you’ll be relieved of the folder, those few seconds feel like an eternity.

To me…To me…I guess…I guess…I’ve worked for some very demanding people, I guess, and maybe you didn’t. Because if I had given them a report like this, they would have absolutely ushered me out of their office. They would have…They…There’s no summary. There’s no…There’s no kind of summary here for management. It’s a database with thousands of entries, and my boss never would have let me get away with giving him a database.

Martel was not alone in his assessment of Ray Sohl’s work. Wayne Poyer remarked that “it begs belief that this is so incomplete.” Jo-anne Barnard expressed surprise that the report showed no significant results.

We have no information about Ray Sohl’s body language or the position of his arms at the October 22, 2007 board meeting. At that meeting the board ratified Ray Sohl’s “annual salary increase and bonus” and confirmed publicly, for the first time that we are aware of, that upon completion of 6 years of service, Ray Sohl would be “given title to the lot at 626 Lakeview free and clear of any encumbrances.”

John Martel, now in part occupying the position of his own former boss, remarked at the November meeting that Wayne Poyer was an easy boss.