You are here: Home / Board Conduct / To Build a Class Act Type Thing, You Must Vote Your Conscience 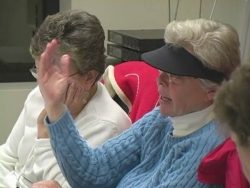 One of the issues taken up at the November 26th board meeting was Ray Sohl’s appeal of the Architectural Committee’s rejection of his plan to locate boat and RV storage.

Director Robin Pedlar, a member of the Architectural Committee, summarized one of the reasons for that committee’s rejection: “It’s pretty ugly.” Why let a reasonable objection like that stand in the way of what the Board and the GM want to do, when the Board can simply overrule the committee?

Thus, we have the appeal of the Architectural Committee’s decision that’s shown on the following video clip.

In previous posts, we criticized several LHCC directors for their utter lack of meaningful contribution to the discussion taking place in the boardroom. We were pleased to see that at this meeting just about all directors present participated in the discussion at one time or another. Perhaps they didn’t want to win our Silent Sitter award. The absence of Suzy Marcus may have added to the pressure on some board members to contribute. With one of the best candidates absent, it was just about anyone’s award to win.

Director Rick Bleck, who did not meet the 1 year ownership requirement for nomination set forth in LHCC’s bylaws and was invisible on the campaign trail but was elected anyway, came out of his shell and offered these insightful comments:

I guess I’m going to show some ignorance and obviously not knowing the history of it and that’s why I’ve been learning a lot at these meetings and stuff. Is this the only common area that the association owns? To me it’s a real eyesore. You’ve got rusted out campers up there and you’ve got boats in disarray. … I don’t know how long the association’s been around and/or committees but…. I own property down in Orlando. The front of…when you enter the property, it’s got trees, palm trees, and flowers, and you come up here and it’s like holy smokes, who lives back in there? I know there’s some nice houses, nice lake back there, and all of a sudden you come in around the corner. You’ve got these beat up trailers and campers. I don’t know if you have any kind of regulations like if the camper is 10 years old you’ve got to get rid of it if it’s rusted out. I really hope there is a common area maybe in the back of, somewhere in the back where you’re not looking at this stuff. The other thing is I’m just surprised you’d allow this. I mean I’ve got my boats in my yard. That’s where I keep my boats. So, anyway, I’m not really sure about the issue here. But anyway, I was thinking, we need a…actually, the office should be a building with bricks and stuff, and you’ve got this old beat up house. I’m just kind of amazed that all these places I’ve ever had or lived in associations, it was really a class act type thing. This kind of parlays into maybe I’ll start getting active in this now. To entertain something like this, but again, my ignorance. We may not have any other land here and this may be the only solution. I hope someday that…I headed back to this one area, I’m going, I can’t believe that we’d ever entertain this.

When Rick Bleck described the treasured Lake Holiday office as an “old beat up house,” we wondered if we looked more closely, perhaps we might be able to see smoke rising from the other directors’ heads. Apparently, no one bothered to copy Rick on the memo that if you can’t mindlessly focus on positive, un-critical comments, you will be ostracized. We dreamed of a very brief return of Chris Allison. We can imagine his response to Rick Bleck would have created a memorable video moment.

We applaud Rick Bleck’s candor and his willingness to address things that perhaps other directors would like to cover up. Lake Holiday should and can be a class act, and Rick Bleck indicates he’s willing to tackle areas in which it falls short. For his straightforward, on-the-record statement that few of his fellow board members have the courage to make, we could just about eliminate Rick Bleck from consideration for our Silent Sitter award. Just about. But not entirely. And not so fast.

Rick Bleck discredits his own comments by remarking that he is showing “ignorance” and that the present proposal may be the only solution. You can’t persuade others if you can’t convince yourself. Board members need to come to meetings prepared. That means reviewing the topics in their board books and investigating other solutions before the meeting. If every board member does not diligently undertake these steps, the ability of the board to reach intelligent decisions at a meeting is lost. Rubber-stamping the decisions already made by other members is a problem fueled by the Silent Sitters.

Bleck raised a number of serious objections to the plan for boat and RV storage, and just before the vote director Steve Locke advised him that this plan is only temporary. However, Rick Bleck never got responses to his objections or answers to the questions about which he professed ignorance. He never pressed Locke or other directors on what the permanent solution would be, when it would be implemented, and what it would cost. 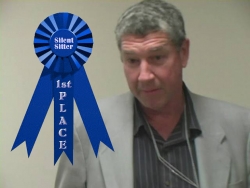 Compare Rick Bleck’s contribution to that of director Robin Pedlar. Our quote above represents nearly Rick’s entire contribution over 2 meetings. In addition to her comments shown on the video, Robin Pedlar weighed in on another topic at the meeting, John Martel’s proposal for board workshops to foster open communication between property owners and the board. We have a mixed view of 2 points she raised in that discussion. Robin thought that it would be helpful to have neighbors get together for coffee and talk about what they like about Lake Holiday, something that smacks of nothing more than a social gathering. But she also was one of few directors who expressed a willingness to listen to whatever complaints members had in an unstructured setting, something we support and that seemed to frighten other directors like Ken Murphy.

The standard for our Silent Sitter award is not purely the lowest number of comments made. We draw a more meaningful distinction than simply counting words. During the discussion on locating boat and RV storage, Robin Pedlar said she and her committee thought it was “pretty ugly.” Evidently, she voted her conscience, because she was the only director that voted against this plan. Rick Bleck, while strongly criticizing the plan, came to the meeting unprepared to discuss alternatives and didn’t press anyone else at the meeting for specifics. When the vote was taken, Rick Bleck voted in favor of a plan that he could not believe would ever be entertained. Steve Locke’s comments would not satisfy a person with serious objections. They would, however, satisfy a Silent Sitter.

For voting in favor of overturning the decision of the Architectural Committee, Rick Bleck is our Silent Sitter for the November meeting.

The question for December: will Rick Bleck three-peat? We hope he’s better prepared, more forceful and less equivocal, and votes according to his concerns, even if that means standing alone.

We support building a class act. To have any hope of doing so, each and every LHCC director must vote his conscience.