You are here: Home / Archives for Mark Stivers

All that’s bad enough. What’s even more troubling is how she’s used the media to distort what’s behind her efforts and to distort how the plaintiffs regard her inappropriate meddling in active litigation.

Let’s be absolutely clear. The plaintiffs are not “super-excited” by Jill Vogel’s efforts. They’re very troubled a sitting state senator would even contemplate introducing legislation drafted by 1 side of an active court case to attempt to re-write Virginia law in an area where she has acknowledged she lacks both experience and background, let alone publicly commit to doing so. She exposed her own lack of background when she described the POA Act as “almost 40 years old.” The POA Act was first enacted by the Virginia legislature in 1989, making it 19 – not almost 40 – years old. It’s a clear abuse of the legislative process when poorly informed legislators try to pass legislation to tip a pending court case that could, if enacted, end up having widespread, unintended consequences and upset well-settled Virginia law.

I don’t want to mess up what the plaintiffs otherwise want to gain.

That’s disingenuous nonsense. Wayne Travell, plaintiff’s counsel, in a face-to-face meeting, in phone conversations, and in multiple email messages unambiguously communicated to Vogel that the plaintiffs opposed her inappropriate intervention. After reading Saturday’s Winchester Star, Travell emailed Vogel to express that he was “shocked” at what he read. Of Vogel’s characterization of the plaintiffs’ position, Travell wrote:

Nothing could be further from the truth.

Vogel chose to interfere in an active court case. Her interference was prompted by the request of 1 side, not all sides, and was accompanied by strong and repeated requests by plaintiffs that she abandon her ill-advised plan. Those facts don’t square at all with her own statement that she is not trying to “mess up” the plaintiffs’ position in an active case. That is exactly what her legislation is all about: messing up 1 side for the benefit of the other, which just happens to be that of a big developer.

Vogel committed to proposing new legislation before even meeting with counsel for plaintiffs, so she could not possibly have understood what plaintiffs “want to gain” before deciding to intervene. She accepted draft legislation from the lawyers for 1 side. Despite learning before the allegedly “open meeting” that counsel for the plaintiffs would not be allowed to attend, she went ahead and held her meeting anyway. Later that same night, the lawyers that drafted her legislation called her to say that their own language wouldn’t solve their legal problems, so she’d have to come up with something else to fix their troubles. For a legislative session that starts on Monday, June 23rd, Vogel has been unable to provide a copy of her proposed legislation at this writing – late in the afternoon on the day before.

Local attorney Mark Stivers told the Winchester Star that he believes LHCC is a property owners’ association that falls under Virginia’s POA Act. If he really believes that, why is there so much effort spent to change the law? If the law is on your side, why do you need to change it?

The news according to LHCC: a meeting, open to any property owner, will be held on June 18th to discuss the impact of the Bemis lawsuit on Lake Holiday. Mark Stivers will “moderate” the discussion.

A simple, polite request to offer an other perspective: 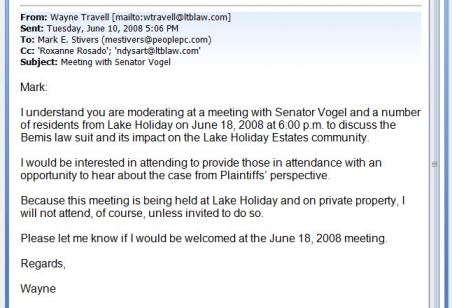 With the simple request unanswered, a renewed request sent by fax: 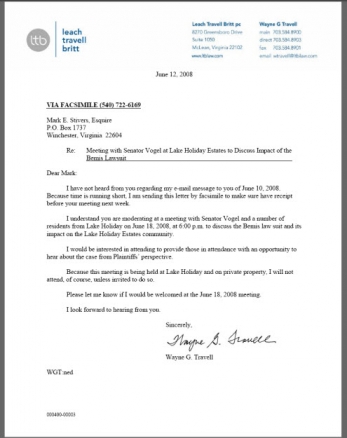 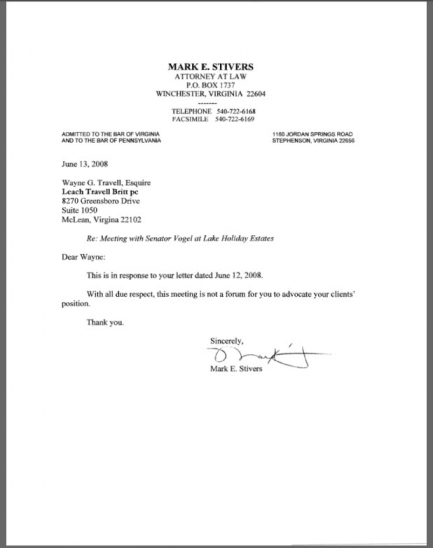 The meeting is billed as a moderated, open discussion of the impact of the Bemis lawsuit. It will be just a one-sided, controlled series of speeches by Stivers and others to advocate their positions. When you have to lure people, including a state senator, to a meeting by promoting it as something it’s not and your views can’t withstand polite discussion, you’re on shaky ground.