In late May, Lake Holiday resident Bill Masters filed a lawsuit in the Frederick County Circuit Court, seeking a judicial review of the October 2006 board of directors election.

Bill recently gave us an update on the status of his case, and things are moving forward quickly. A hearing is scheduled for Thursday, August 30th at 1 PM at the Judicial Center on 5 North Kent Street in Winchester. Circuit Court hearings are usually held in the 3rd Floor courtroom. We urge everyone to show up in support of Bill Masters. If Bill Masters loses this fight, then future elections at Lake Holiday are meaningless. Miller & Smith will have the power to dominate every election at Lake Holiday – while at the same time claiming an exemption from dues for the vast majority of their lots.

Before Bill got the opportunity for a hearing, LHCC filed a motion for Summary Judgment. That Summary Judgment motion is what is on the court’s docket for August 30th. After LHCC filed its motion for Summary Judgment, Miller & Smith filed a similar motion with the court. Why is LHCC leading the charge to avoid a hearing? LHCC could have sharply reduced its legal costs by letting Miller & Smith defend its own voting rights. LHCC should have adopted the position that, as an institution, it is indifferent about election outcomes and would support and implement any ruling of the court. But, as Chris Allison observed, Miller & Smith and LHCC are partners. It’s hard to be indifferent when you are partners.

For summary judgment to be granted, there can’t be any material facts in dispute. Presumably, the arguments in court on August 30th will focus on the 1984 documents: the Settlement Agreement and the IL Declaration of Covenants.

Our earlier posts on the October 2006 election, Rumbling in the Community and Fixing An Election, Chris Allison Style, make clear our view: that election was a sham.

Did LHCC file a motion for Summary Judgment to block a full hearing of the facts? Maybe some parties are more than a little uncomfortable having to explain some things under oath, specifically that:

This juicy little email exchange between Chris Allison, the then LHCC President, and John Conrad of Miller & Smith shows that they were communicating back and forth about the October 2006 election. Conrad wants to raise anger, and Chris Allison wants to “learn from” the negative campaign tactics of Republicans, a group he otherwise dislikes. Chris Allison seems frustrated that up until that point he could only get “positive spin” from the Concerned Owners Group. This is the same group that distributed Sue Fuerst’s hate-speak mocking the handicapped. Is it appropriate for the LHCC President to be pushing so hard for others to adopt “negative ads” in a campaign in which he is not a candidate? 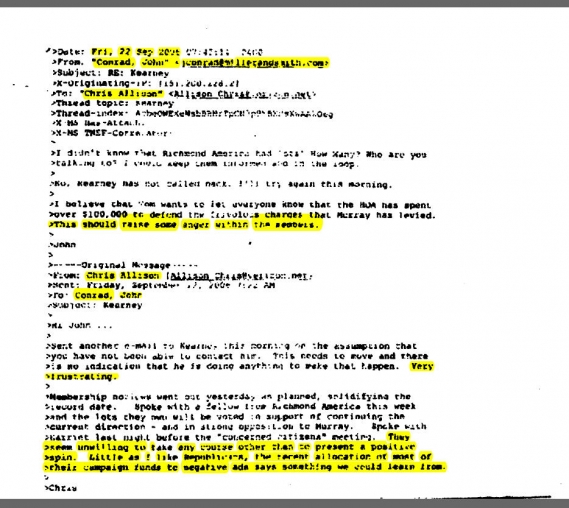 To carry out his political agenda, Chris Allison allowed Miller & Smith to vote approximately 100 Trust lots that were prohibited from voting under the terms of the 1984 documents. To vote these lots, they paid dues for just a couple of months before the election – despite the fact that they owned these lots since the end of 2002. No other owner can avoid paying dues for 3 years, suddenly decide to pay dues just a couple of months before an election, and have his vote counted.

Did the important issue of voting the Trust lots get discussed at a public board meeting before the October election? Not on your life. Chris Allison wrote in an email to fellow board member Margie Hoffman that the issue of Miller & Smith voting “was and is not a Board issue.” Events surrounding voting the Trust lots took place in July and August of 2006, well before the October election. There was plenty of time for the board to openly consider this power-changing issue. But Chris Allison alone made this decision and only responded to questions once Bill Masters objected to the conduct of the election. Margie Hoffman caught Chris Allison in a deliberate attempt to avoid open debate of an important issue but did absolutely nothing about it.

At a bare minimum, it should have been a board issue, because it was a material change from what was a long-held understanding in the community, that the Trust lots don’t vote. In the June 2006 election, the most recent election before the 2006 board election, the Trust lots were not voted for new bylaws and articles of incorporation, votes that used membership as the standard for participation. At a December 2002 public meeting, then LHCC President and current director Pat Shields, Oakcrest CEO Jim Vickers (a partner in the entity we refer to as Miller & Smith), and then LHCC counsel Stephen Moriarty represented that dues were paid and membership began on the sale of a Trust lot to an individual.