You are here: Home / Board Conduct / Now Is Not The Time To Be Passive

We’ve finally gotten around to choosing the Silent Sitter for the January 28th board meeting. The meeting was held on a Monday, and it was some time before we could review the video tapes to pick a Silent Sitter award winner.

On the next Wednesday night, before we had reached any decision, LHCC reported that a director resigned. Oddly, it did not announce who resigned. The next day LHCC confirmed privately that Rick Bleck, who did not meet the 1 year ownership requirement for nomination set forth in LHCC’s bylaws and was invisible on the campaign trail but was elected anyway, had resigned but still did not publicly identify the resigned director.

Just who resigned was a hot topic on The Summit Advisor two weeks after Bleck resigned, and posters there repeated what we had announced earlier. Just before the 2/23 Round Table, LHCC updated its website with what was by then stale news, identifying Bleck as the resigned director. After all, there’s no sense being secretive about something that is common knowledge. It’s peculiar that LHCC would take so long to keep the community informed on basic governance issues. Directors have come and gone before.

Even without Bleck, there were several solid contenders for the Silent Sitter award on January 28th. We’re getting the sense that LHCC directors love our Silent Sitter award. So many of them seem to be working overtime to win it. Suzy Marcus, winner of the award for the December meeting, had little to say. Specifically, she had nothing to say about her Realtor Outreach scheduled for the November meeting that she missed. It’s never been mentioned since.

Noel O’Brien, another potential winner in any given month, also had little to say. However, Noel did introduce a motion to move the regular monthly board meeting from Monday to Tuesday in order to give board members more time to review their board books. We support the notion of board members having ample review time, but by itself it’s not a meaningful improvement. If board members remain Silent Sitters, increasing review time is meaningless. Voting down Noel’s motion to switch board meetings from Monday to Tuesday took about 6 1/2 minutes. 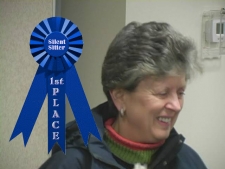 By comparison, discussion of LHCC’s new proxy policy took about 3 1/2 minutes. The proxy policy is far more important than deciding whether to meet on Monday or Tuesday. Yet it got about half the time in a what was more than a 2 hour meeting. Generally speaking, when you have an important issue covered in 3 1/2 minutes, press the pause button on the video and look around. You’ll find your Silent Sitter.

We’ve covered why LHCC’s proxy policy is a bad idea. In the discussion in December, Jo-anne Barnard favored giving voters increased opportunities to express their opinions:

…I think we should provide the members every opportunity to vote whatever way they want.

However, despite our post and her initial opinion, Jo-anne voted in favor of LHCC’s new policy – which restricts how voters express their opinions. The policy was adopted at the January meeting. The policy restricts voter choice by requiring proxies be directed, something that is not in either LHCC’s Bylaws or Virginia statutes. It’s inappropriate for LHCC directors to effectively amend LHCC’s Bylaws by passing a board resolution.

The proxy policy also helps perpetuate the difficulty that Membership Lot owners have to revoke absentee ballots, a difficulty that proxies can fix. Restricting voter choice and making it hard for Membership Lot owners to revoke absentee ballots divides the community. Jo-anne pointed out in December that restricting proxies could be challenged, but directors didn’t vote on the proxy policy at that time. When it came time to vote in January, Jo-anne brought up none of this. Then again, it only was a 3 1/2 minute discussion of an important issue. Congratulations, Jo-anne Barnard! You’re our Silent Sitter for the January 28th meeting.

On a humorous note, one contribution Jo-anne did make at the January 28th meeting was attempting to correct Steve Locke after he mixed up the names “Platt” and “Pratt.” At least everyone had a good laugh about the incident.

Many in the community probably held high hopes for Barnard’s election in October. She’s a lawyer with an impressive resume. However, we understand that she didn’t attend the one candidates’ forum LHCC held before the 2007 election, and she skipped the 2/23 Round Table, an event all board members were asked to attend. We wonder if she’s reluctant to answer questions from property owners. Answering questions from those owners comes with the territory when you seek and win a board seat of an organization serving 2700 properties.

Based on her background, we assume that Jo-anne Barnard is familiar with the problems brought about by passive board members. One relatively recent example is the collapse of Worldcom. In June 2003, former US Attorney General Dick Thornburgh issued the Second Interim Report in the Worldcom bankruptcy proceedings. In his report, Mr. Thornburgh criticized board members who approved board actions:

with little or no information and almost no inquiry. A board vigilant about fiduciary duties would not have been so passive.

His report pointed to a “culture and internal processes that discourage or implicitly forbid scrutiny and detailed questioning” and the lack of “meaningful deliberation or analysis” by Worldcom’s board as big factors in Worldcom’s collapse. Mr. Thornburgh concluded:

In short, at a time when the Board should have been more assertive, it instead became increasingly passive and submissive.

To be sure, Lake Holiday is not Worldcom. Sometimes, examining the same problem on a dramatically bigger scale helps make the possible impact of that problem more clear. Passive board members weren’t good for Worldcom. Silent Sitters aren’t helping Lake Holiday.