You are here: Home / Governing Docs / No Timeline + No Quoted Price = No Real Plan!

We’ll soon be asked to amend our deeds and approve LHCC’s Utility Extension Program (UEP). We believe the UEP as proposed is not a legitimate method to extend utilities and should be rejected. We encourage everyone to vote NO on these deed changes. We’ve prepared some questions for the LHCC Board about the UEP and some additional facts to evaluate any response. We believe that most people who take a hard look at this program will come to the same conclusion we have: it’s just a bad idea.

1. Why should I agree to start paying even higher dues in January 2008 without knowing when line extension work to my lot will actually begin or be completed?

The UEP has no start date for the actual commencement of line extension work. When asked about the timeline for utility extensions, Wayne Poyer said: “Very good question. We can’t answer that.” Dave Buermeyer said it would be “many years…don’t know how many years….” A plan without a timeline is no plan at all.

2. Why should I agree to pay for utilities without knowing the cost?

The UEP has no quoted price for the line extension work to be performed.

3. Since there is no actual start date and no quoted price for a line extension to my lot, why should I amend my deed to give LHCC increased authority to place liens and foreclose on my lot?

Since LHCC believes that deeds can be amended without your consent, if the UEP is approved, you may be facing foreclosure over a bill for utility work that you don’t approve of or don’t want. 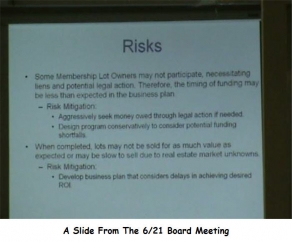 4. Have you disclosed your real motives behind the UEP to Membership Lot owners?

Dave Buermeyer’s UEP presentation to the board focused on how LHCC would make money. He emphasized that “LHCC Return on Investment is high with low risk.” Wayne Poyer said that “As soon as we launch this program, those Membership Lots will instantly have sufficient value to make it worth going after them.”

5. Why should I agree to pay more dues for utilities now when my money may never be there to be used for that purpose?

In 2006, LHCC moved $150,000 from the builder conformance bond account to pay general corporate expenses. LHCC also moved $450,000 from the money set aside to refurbish the clubhouse to pay other bills. Then, these loans were paid back with the proceeds from the utility sale. Before these repayments, these accounts were completely wiped out. There’s no utility sale to bail out LHCC in the future. Using money for something other than its intended purpose continues even now. At the 6/25 board meeting, LHCC once again approved dipping into builder conformance bond money to pay for other things. There’s no safeguard that the money Membership Lot owners pay for utilities will actually be there to install utilities, because LHCC borrows money from one account to spend it on something else.

6. What will stop LHCC from making utility service to LHCC lots the top priority, leaving Membership Lot owners other than LHCC waiting and waiting?

7. Why do you misrepresent Aqua Virginia’s line extension policy?

8. Why do you unfairly apply Aqua Virginia’s line extension policy?

At the 6/21 board meeting, Dave Buermeyer made it clear that the Rule 20 credits from Aqua Virginia for the first line extension project would be not be paid back to the those who earned these refunds, but instead would be put into the fund to benefit other lot owners. This is unfair. These refunds should go directly to those who earned them in the first project. The unfairness may not just apply to the first project done under the UEP. Fairly applied Rule 20 refunds must be paid back to those that paid the line extension cost, but that’s not the way the UEP works.

9. Why did you file a joint petition with the SCC where Aqua Virginia would not be required to make a financial contribution for line extensions?

In February of 2006, LHCC, LHEUC, and Aqua Virginia filed a joint petition with the SCC to transfer the utility’s assets to Aqua Virginia. The joint petition originally proposed a line extension policy where a Membership Lot owner would pay the entire cost of a line extension and would receive only a $1000 refund for each intervening lot that connected within 5 years. LHCC proposed and sought SCC approval for the notion that Membership Lot owners would pay the entire cost of line extensions and that Aqua Virginia would contribute nothing.

10. Why did you spend our dues money to fight Ogunquit’s recommendation that Aqua Virginia make financial contributions to line extensions for every Membership Lot owner?

On June 15th of last year, Ogunquit, the only respondent in the utility transfer case, filed testimony that challenged the line extension policy originally proposed. On July 25th, Chris Allison filed testimony on behalf of LHCC to fight Ogunquit’s recommendations. LHCC proposed and Chris Allison defended a line extension policy that, according to Marc Tufaro of the SCC, “differs radically from all other water and wastewater utilities regulated by the Commission.” Then, on September 5th with about a week to go before the transfer hearing, Aqua VP Mark Kropilak filed testimony that said “we have now moved to a position” where Aqua would contribute 3 1/2 times the annual utility revenue per lot (i. e., $75/mo x 12 months x 3 1/2 = $3150) to the cost of a line extension for each Membership Lot and to extend the time period for credit for intervening lot owners who did not initially request service but connected later from 5 to 10 years. A multiple of 3 1/2 times the estimated annual utility revenue and a recovery period of 10 years were the exact terms cited by Ogunquit and the SCC staff in their testimony. According to the testimony of the SCC staff, every other water/sewer utility in the state of Virginia contributed 3 1/2 times utility revenue toward line extension costs, but LHCC wanted Aqua Virginia to contribute nothing. Ogunquit helped to persuade Aqua Virginia to contribute $3150 in today’s dollars for each Membership Lot owner that makes a line extension request. LHCC wanted that contribution to be $0.

We have yet to figure out how the behavior of Chris Allison and the LHCC Board is consistent with their statement announcing the UEP: “The Association Board is responsible for promoting the interests of ALL Lake Holiday Members.”