For those of you who missed LHCC’s May 14th meeting at the Reynolds Store Fire House to pitch the UEP, it was full of strong statements by many of the LHCC presenters. Unfortunately, a number of those statements were not true. Chris Allison provided one of the best examples of playing loose with the truth. 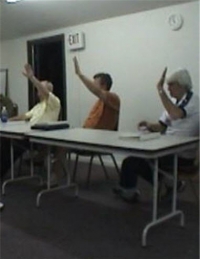 Chris Allison attempted to respond to a claim that the board recently reduced the asking price on a building lot it has listed for sale to $45,000. The claim was absolutely true. It was directed at the board generally, not Chris Allison personally.

But Chris Allison’s response was an ill-timed temper tantrum that focused on distancing himself from the board’s decision. Of the board members present, he alone was sensitive to the charge that the board has no business sense. With his voice cracking, Chris Allison griped that his critics say things that have “absolutely no substance.”

Among the many allegations that Chris Allison made in his rant, we were struck by his statement that he was “one of the key people opposed” to reducing the price on that buildable lot held for sale. His statement was utterly ridiculous. We recently edited a video clip of Chris Allison voting in favor of reducing the price on that buildable lot at the April 23rd board meeting. In fact, the vote in favor of cutting the lot price was unanimous, as reflected in LHCC’s own minutes. A picture of Chris Allison from that actual vote (seated furthest to the right) with his hand clearly raised to approve the price cut appears nearby. Voting in favor of something and opposing it are polar opposites. It’s ridiculous to state at a recorded public meeting that you opposed something, particularly when it’s so easy to prove you voted in favor of it.

Listen to Chris Allison’s own words from the May 14th meeting.

there are two guys…three guys sitting here that know damn well I wasn’t in favor of dropping the price of the lots at all. I was one of the key people opposed to it. But I’m not 11 people.

Then, watch the video of what actually transpired at the April 23rd meeting. Chris Allison never says he is opposed to cutting the asking price on the lot. On the issue of cutting the price, he states:

Actually, when it comes to a motion, I’m going to approve it.

Judging this topic, Chris Allison is either a liar or delusional. Chris Allison exploits the fact that very few people attend board or other public meetings. Those that do attend either elect not to challenge him or are silenced by his grade-school intimidation. Chris Allison will go to crazy lengths – contradicting published board minutes – to attempt to discredit any critic. The “three guys sitting [there]” that knew “damn well” how they and Chris Allison voted didn’t have the integrity to correct Chris Allison. Apparently, they think that it’s more important not to confront a fellow board member in public than to provide members with accurate information.

After considering this one simple test, we wonder, to use Chris Allison’s words, who continually dispenses information that is not correct?