You are here: Home / Board Conduct / LHCC Board Votes Down Humanitarian Assistance Policy 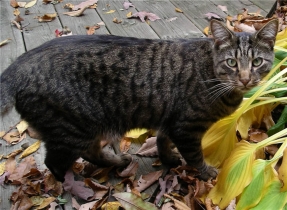 The Boyd family’s cherished cat Colby has gone and remains missing since mid-February. Finding Colby safe and sound is the paramount objective. If you’ve seen or have any information to help Colby get back home, please call or email us, and we’ll quickly put you in touch with the Boyds.

Colby’s unfortunate disappearance brought to the fore the issue of signs at Lake Holiday. The Boyd family had run afoul of Lake Holiday’s prohibitions on signage in their efforts to locate Colby. They took the initiative to encourage the Board to show more reasonableness in administering Lake Holiday by developing a more humanitarian outlook. However, at the February 26th board meeting, the LHCC Board voted down the humanitarian assistance policy championed by Sharon Boyd.

At issue was a single sign to locate Colby placed at the front gate. Ms. Boyd received permission from LHCC President Wayne Poyer to have a sign posted for at least 2 weeks because of the extremely harsh winter weather conditions and the fact that the next regularly scheduled Board meeting was too long to wait. She prepared a sign and delivered it to the LHCC office. The sign was placed at the front gate by LHCC employees in a spot chosen by them. The sign contained the statement: “This sign is sanctioned by LHCC.” Director Chris Allison alone complained and initiated a process that caused Ray Sohl to immediately remove the sign, despite President Poyer’s prior commitment.

The humanitarian assistance policy motion that would have saved Colby’s sign was defeated 7 to 3, with Martel, Buermeyer, and Hoffman voting in favor of the motion. Shields, Anderson, Marcus, Murphy, Locke, O’Brien, and Allison voted against it. Poyer was absent from the meeting. But the vote itself is not the whole story. Prior to the board meeting, Ms. Boyd had secured commitments from several board members to support the motion. We believe that this support was nowhere to be found in the discussion of the motion. Not one of the 3 directors who voted for it said anything prior to the vote itself to try to persuade others to their point of view. Despite voting for the motion, Margie Hoffman said nothing. The best that John Martel could muster was a lukewarm statement just prior to disposing of the issue:

Since I told her I would vote for it, I vote in favor it.

Like Martel’s non-existent support, Buermeyer suggested the issue be dropped just before voting for it.

We believe that reasonable advocacy requires more than saying nothing or just casting a vote. It requires making a good faith effort to persuade others. We don’t think any of that was on display at the board meeting.

Among the motion’s critics, Steve Locke called the motion an attempt at “micromanagement.”

I think we need to have a motion on the table so we can reject it.

All of Chris Allison’s comments were against the motion. Then, he moved to approve the motion as written, something that was such obvious nonsense to everyone in the room that it drew laughter from the rest of the board. In his remarks Chris Allison compared the need to post signs to help locate a missing child or pet to posting “for sale” signs on a used truck. Duh. You shouldn’t compare things that aren’t comparable. Children and pets live and breathe. Trucks don’t. When children or pets go lost, parents and owners are in a panic to locate them because they could die. Death is irreversible. You can’t just get another child or family pet the way you get another truck.

Noel O’Brien showed both her ability to take orders and to get to the core of a problem:

When I first approached Wayne [Poyer] with this, I was told we don’t make exceptions. A rule is a rule. We don’t put signs.

Lake Holiday shouldn’t be one big rule book where no violation is tolerated. It should be a warm, welcoming, humanitarian environment. The Board would like to imagine that no exceptions are allowed. But the Board makes and allows exceptions every day. There are boats parked on the streets. Waivers of fees are granted routinely. Did someone other than a Board member or Lake Holiday insider actually complain about the Boyd family’s efforts to locate Colby? Or did overly aggressive Board members enforcing dictatorial rules look for violators to be punished? The Board clings to its mantra of “a rule is a rule.” If, God forbid, a Board member’s child went missing, how long would the “we don’t make exceptions” standard hold up?

The Board shows no common sense in enforcing rules. Because some are not holding down actual jobs, they make their job finding violators. They adopt the strictest interpretation of the rules and then search out violators. Outside of Lake Holiday, common sense is applied in enforcing rules. Police officers do not pull over and issue tickets to drivers traveling 2 MPH over the posted speed limit, even though that constitutes a rule violation. The LHCC Board cannot exercise this kind of basic common sense. That goes a long way toward explaining why they spent over $550,000 in legal fees in 2006.

For orientation, at the table on the left of the video are directors Pat Shields, Chris Anderson, Margie Hoffman, and Suzy Marcus. Secretary Ken Murphy, VP Dave Buermeyer, and Treasurer John Martel are facing the camera at the head table. To the right of the video, starting closest to the head table, are general manager Ray Sohl, Steve Locke, Noel O’Brien, and Chris Allison. Because of limitations of camera placement, those on the right side of the room may not be in view.

Videotaping a Lake Holiday board meeting is a new event. Just recently several homeowners started an independent effort to videotape each board meeting to foster more open governance. The costs to edit and host video on a frequent basis are not small, so we’ve offered our assistance with this important and nascent effort to insure that it succeeds. For their efforts they deserve our collective support and encouragement. Our mutual goal is to provide a basic synopsis of a board meeting within 24-48 hours, along with clips of important segments within the meeting. If you have a question about what took place at a meeting that’s important to you, send us an email.