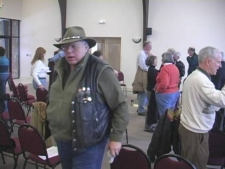 Lake Holiday’s board held a Round Table on Saturday, February 23rd to give property owners a chance to ask questions and receive answers from board members and the GM. All but two board members (Jo-anne Barnard and Suzy Marcus) attended, along with GM Ray Sohl. Wayne Poyer answered most questions, including those questions posed to other directors. Steve Locke, Noel O’Brien, and Robin Pedlar didn’t answer a single question. One wonders why Wayne Poyer didn’t let these directors contribute at all during more than a 2 hour informal question-and-answer session. After all, every board member was asked to attend, and the purpose was to give owners the opportunity to ask questions of the entire board, not Wayne Poyer exclusively.

As he promised on his website, Bill Masters attended the meeting and waited his turn to ask questions of the board. On a number of occasions, Round Table audience members attempted to upend the purpose of the meeting and direct questions to Masters. At one point even board member Steve Locke engaged in this. The result: several fights nearly broke out.

Three of these near-fights are combined on the above clip. The first involved resident Bob Fraser yelling at an innocent and uninvolved camera operator to “keep it over here punk” to capture his rant. This was provoked by Locke’s turning the purpose of the meeting on its head and directing questions to Masters, who was the only audience member that either the board or other attendees wanted to question. Masters was singled out.

A short time later, the question-answer format got back on track. Masters directed a question to Treasurer John Martel, but, instead of getting an answer from Martel, Poyer decided to answer the question for him. Masters complained. Evidently, director Steve Locke was still fuming from his perception that Masters didn’t answer his questions. Locke moved so aggressively toward Masters that he had to be restrained by his wife and ordered by Wayne Poyer to return to his seat.

The third incident came as the meeting was breaking up. Fraser, apparently not content with one YouTube moment, wanted a little more camera time. After getting up and walking toward the exit, he reversed direction, moving aggressively toward the camera operator he previously called a “punk.” That forced Masters to put himself between an obviously irate Fraser and his target, if only to delay Fraser to give him a chance to cool down.

Fortunately, these almost-altercations remained just that, and no real fights broke out. We’ll state the obvious: violence and suggestions of violence, including the intimidation shown on the video, have no proper place, and certainly not at a Saturday morning community meeting over coffee and donuts. Steve Locke and Bob Fraser owe Masters, all attendees, and every owner an apology for their behavior. If you can’t behave in public, stay home.

Bob Fraser and threatening language have crossed paths before. In June of 2006, a homeowner circulated an email with information about a recent post on this website. Bob Fraser’s reply? He started with profanity and ended with “I’ll get even.” (Click on the image to read his exact words, which contains the profanity unedited.) Former LHCC President and current Architectural Committee Chair Lou Einstman, one of the email recipients, didn’t like Fraser’s tirade, and he told him just that.

Fraser wasn’t impressed by Einstman’s principled stand. Fraser’s response to Einstman: “You are a sanctimonious jerk.” At least he replaced the four letter words with longer ones that can be quoted here.

Is it believable that these former adversaries settled their differences and were working together on the oft-cited positive agenda of the board? In October 2007, both Einstman and Fraser put their names on the same Lake Holiday Owners Group postcard (which also bore Fraser’s return address), urging their neighbors to elect the same candidates. The postcard omits all mention of weak minds and sanctimonious jerks.

Was this mailing just an outsider’s attempt to try to create the illusion of political unity at Lake Holiday? Is it credible that Einstman and Fraser got together and chipped in their proportionate cost of this mailing, given the history we’ve reported? Or are people that label others as having weak minds and being sanctimonious jerks united in at least 1 thing – keeping control to themselves?